Iran Regime, an Agent of Instability Throughout the Middle East 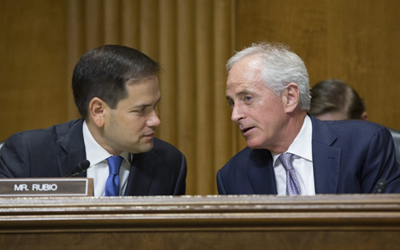 The Washington Post, March 29, 2017.At Monday’s Senate Foreign Relations Committee hearing on Iran there was, given the political environment, rare and welcomed unanimity. Ranking member Sen. Benjamin L. Cardin (D-Md.) remarked that although he voted against the Joint Comprehensive Plan of Action on Iran, he doesn’t think it would be wise to withdraw. He continued:

Having said that, Iran’s activities today are as bad as they have ever been and probably worse. They are certainly increasing their terrorist sponsorship in the Middle East as we see in so many different countries in that region. Their record on violating the ballistic missile obligations are well known and well understood. Their human rights violations against their own citizens are horrible, one of the worst countries in the world. They violate the arms embargo and the list goes on and on. So, it is appropriate to get this Committee to look at what we can do to make sure that first, the Iran nuclear agreement is honored so that Iran does not become a nuclear weapons state, but then secondly, look at those activities that were not covered under the JCPOA as to how we can play a stronger role.

One of my criticisms of the JCPOA was that it would become our de facto Middle East policy and Iran would expand their destabilizing activities. I think we are seeing a lot of that today. Regionally, we’ve seen an escalation in Iranian intervention. Iran, along with its allies in Russia, has continued to prop up Assad at the cost of countless lives in Syria. Iran’s support to the Shia militias in Iraq threatens the interests of Sunnis and Kurds alike, not to mention the Shia in Iraq that don’t subscribe to the anti-American, zero-sum politics of the militias that are there.

Iran is arming the Houthis in Yemen, who are in turn attacking our Saudi allies and targeting our ships. Yemen now faces a humanitarian crisis unprecedented in its history. Iran remains the foremost state sponsor of terrorism. It counts Lebanese Hizballah – an organization that has killed hundreds of Americans – as among its closest allies.

Meanwhile, over at the AIPAC Policy Conference, Sen. Robert Menendez (D-N.J.) reminded the audience that “as I said when I voted against that deal, if Iran is to acquire a nuclear bomb, it will not have my name on it.” He too sees a worsening of Iran’s conduct: “Many of us rightly predicted that an Iranian regime that prioritized funding terrorism over the well-being of its own citizens would see sanctions relief as a cash windfall for their terrorist proxies across the region. And on terrorism, we feared that much of Iran’s new economic capacity would be used to propagate violence against Jews.” He added, “It is no surprise then that Iran has not suddenly transformed into a responsible member of the international community. Rather it remains an agent of instability throughout the Middle East, a nefarious actor that continues to undermine American national security interests and our efforts to partner with countries throughout the region working to protect civilians and build democratic governance structures.”

Congressional Democrats speaking at the 2017 American Israel Public Affairs Committee conference, March 28, warned of acts of prejudice against Jewish people and people of other religions around the world. (Sarah Parnass/The Washington Post)

Given this shared assessment of Iran — the JCPOA is not going away but the United States needs to confront Iran in other arenas — it’s not surprising that a bipartisan bill, the Countering Iran’s Destabilizing Activities Act of 2017, with seven co-sponsors from each party, was introduced last week. These are not isolated pinpricks akin to those announced by then-national security adviser Michael Flynn after Iran launched another illegal missile test. (As the Jewish Telegraphic Agency wrote, “The act establishes new sanctions targeting Iran’s testing of ballistic missiles and its backing for terrorism, and also seeks to block the property of any entity involved in the sale of arms to or from Iran. It does not reintroduce sanctions lifted from Iran as part of the 2015 nuclear deal.”) In a summary released last week, senators described potentially far-reaching measures including mandatory sanctions on those involved with Iran’s ballistic missile program, new sanctions against the Islamic Revolutionary Guard Corps and a requirement for the president “to block the property of any person or entity involved in specific activities related to the supply, sale, or transfer of prohibited arms and related material to or from Iran.”

The administration has yet to take a position on the bill, but President Trump would be hard-pressed to come up with reasons to oppose the bill. Should he seek to trim the Senate’s sails — either to preserve executive discretion or to avoid a clash with Russia — he in all likelihood would find himself outmatched by a veto-proof majority in favor of the bill. In other words, Trump would do well to follow the bipartisan leaders on the Hill on this one. It may be the only “win” he chalks up anytime soon.

Previous articleGeneva: Iran’s 1988 Massacre of Political Prisoners Condemned by UN
Next articleSanctions Relief on Iran Regime, a Cash Windfall for Its Terrorist Proxies Across the Region

Australian Supporters of Democracy in Iran, in a letter to Michelle Bachelet, the United Nations High Commissioner for Human Rights (OHCHR), while expressing solidarity with the...
Read more
News: Iran & World

Canadian Friends of a Democratic Iran in a letter to Javaid Rehman, Special Rapporteur on the Situation of Human Rights in Iran, expressed concern...
Read more
News: Iran & World

The Italian Committee of Parliamentarians for a Free Iran, in a letter to Michelle Bachelet, the United Nations High Commissioner for Human Rights, expressed...
Read more
Search