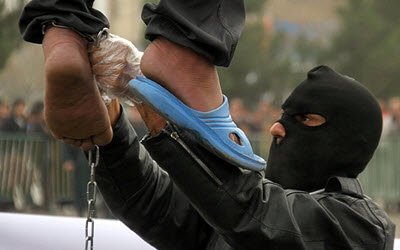 NCRI – Iran’s fundamentalist regime on Tuesday, May 3, hanged two prisoners in the north-western city of Ardebil.

The regime’s judiciary in Ardebil Province said the two unnamed prisoners were hanged in Ardebil Central Prison earlier in the day.

The unnamed prisoners, aged 25 and 28, were hanged at dawn on Sunday, May 1 in Mashhad Central Prison. The 28-year-old prisoner was only identified by his initial A.

The regime’s judiciary in Hamedan Province, western Iran, said that the authorities have hanged a prisoner, identified only by the initials M. R., in Nahavand’s central prison.

They were identified as Ahmad al-Tafi, Abdolhamid Baqeri, Majid Imani, and Reza Hosseini.

The hangings bring to at least 57 the number of people executed in Iran since April 10. Three of those executed were women and one is believed to have been a juvenile offender.

Commenting last week on the recent spike in the rate of executions in Iran, Mohammad Mohaddessin, chairman of the Foreign Affairs Committee of the National Council of Resistance of Iran (NCRI), said: “In the month of April, during and after visits to Iran by the Prime Minister of Italy and the EU foreign policy chief dozens of people have been executed in Iran.”

“The increasing trend of executions indicates that the visits of senior European officials to Iran not only have failed to improve the human rights situation; rather, they have given a message of silence and inaction to the mullahs. This has emboldened the clerical regime in stepping up executions and suppressing the Iranian people. This is the regime that has been the record holder of executions per capita globally in 2015. This bitter reality is not an issue of pride for any of the guests of the religious fascism,” he added.

Ms. Federica Mogherini, the High Representative of the European Union for Foreign Affairs and Security Policy, was in Tehran on April 16 along with seven EU commissioners for discussions with the regime’s officials on trade and other areas of cooperation.