NCRI – The fundamentalist regime in Iran on Wednesday destroyed a Sunni prayer hall in the capital Tehran.

The mullahs’ regime in Iran, misusing the banner of Shiite Islam, denies the minority Sunni population their basic rights.

In the early hours of the day on Wednesday, officials from the Tehran municipality, backed by state suppressive forces (police), raided and destroyed the Sunni ‘Pounak’ prayer hall. The suppressive forces further searched the premises of the mosque’s Sunni imam Abdullah Moussa-Zadeh and confiscated his mobile phone. 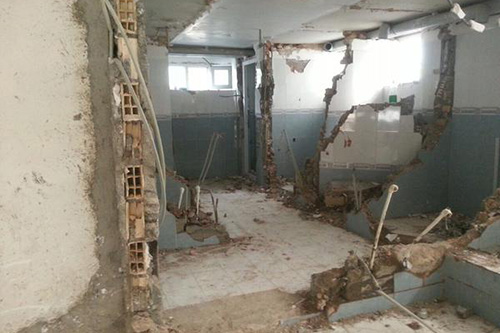 The Tehran municipality had shut down the Pounak prayer hall and placed seals on its entrance earlier in the year. Although the seals were later removed, Sunni Muslims have continued to be prevented from praying in the center.

In his letter to Rouhani, Abdulhamid wrote: “Intolerance towards even a single ordinary prayer hall and its destruction in a city that does not allow Sunnis to build a mosque … not only hurts the sentiments of Iran’s Sunni community, but also offends all Muslims of the world.”

In his trip to Iran’s western province of Kurdistan on Sunday, Rouhani was met with protests over the regime’s treatment of Iran’s Sunni population. In a press conference with the regime’s state-run media in the city of Sanandaj, Rouhani dodged a question about why his cabinet includes no Sunni ministers.

Rouhani replied only to say that the reporter’s question “stinks” and does not merit a full response, adding that his government is not comprised only of a cabinet.

The regime’s security forces have on numerous occasions prevented the Sunni Iranians from holding prayers in particular during the religious Eid festivals.

Maryam Rajavi: Iranian regime is enemy of Muslims, whether Shiite or Sunni