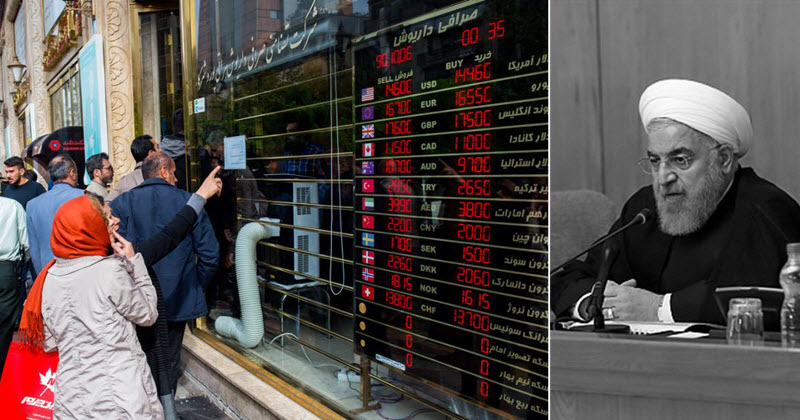 Iranian President Hassan Rouhani told a cabinet meeting Iranians “felt relaxed” on November 28, while he also expressed concern about the political and economic earthquakes that would soon hit Iran.

Rouhani claimed that the government had prioritized controlling inflation, increasing unemployment, and protecting people on low-incomes in next year’s budget, which shows how Iran is truly suffering economically and that the people could not possibly feel relaxed.

It is worth noting that Rouhani’s government doesn’t actually have the budget to create jobs, according to the head of the Planning and Budget Organization, Mohammad Baqer Nikbakht.

He warned against giving “empty promises” to the people of Iran when the Regime’s “limited” resources mean that extra funding cannot be allocated to lowering unemployment without taking funding from elsewhere.

While the Regime could, of course, reduce the amount that it spends on the military or terrorist groups, that is highly unlikely.

This inconsistency is not limited to Rouhani though, in fact, it is emblematic of a state stuck in a sort of limbo.

He said: “The Islamic Republic does not intend to go to war with anyone but we have to increase our capabilities so that the enemy fears attacking Iran.”

But Iran does not limit these ambiguous comments to internal discussions but uses them during meetings with other countries as well. Recently, the head of the Atomic Energy Organization of Iran said that Iran’s patience with Europe’s pledges to keep up its oil trade despite US sanctions was wearing thin and that Iran could well move to enrich more uranium, despite its promises to abide by the nuclear deal.

But why do the Regime lie, when the truth comes out so soon afterwards? Because the Regime is stuck between a rock and a hard place.

They have the choice between meeting the demands of the protesters, which would show that popular protest works and spur further protests, or they can suppress dissent, which would fuel further dissent in the long run.

They can talk about increasing wages by 20% but lack the funds and the political will to do so. Even these talks fail to address the systematic problems that caused them.
The problem is that the Regime could probably solve all of its problems by agreeing to halt its missile programme and stop sponsoring terrorist groups, but this is incredibly unlikely.

Indeed, they just launched a new ballistic missile on Saturday, which gained condemnation from the US.