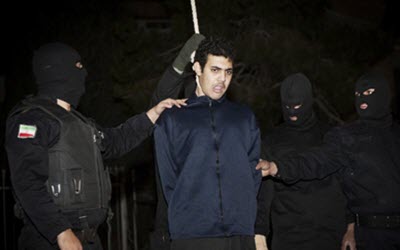 The mullahs’ regime in Iran is the “world record holder” on execution of juveniles, Shahin Gobadi of the Foreign Affairs Committee of the National Council of Resistance of Iran (NCRI) has told the International Business Times.

The Iranian regime’s “alarmingly high” rate of juvenile executions is attracting growing criticism from international charities and has now started to gather increasing disapproval from within its own borders, the IBT wrote on Wednesday.

Iran’s regime has executed more than 70 juvenile offenders in the past decade, according to several reports by Amnesty International this year, also showing the number of juveniles on death row was increasing.

“This [Amnesty] report sheds light on Iran’s shameful disregard for the rights of children,” said Said Boumedouha, Deputy Director of Amnesty International’s Middle East and North Africa Programme on the release of the report on juveniles. “Iran is one of the few countries that continues to execute juvenile offenders in blatant violation of the absolute legal prohibition on the use of the death penalty against people under the age of 18 years at the time of the crime.”

Mr. Boumedouha pointed out that under the Iranian regime’s laws girls as young as nine and boys as young as 15 can be sentenced to death.

Since the release of Amnesty’s report on the alleged rise in executions, there has been a social media backlash at home against the use of capital punishment against minors, IBT reported.

“Hundreds of juveniles, including activists of the opposition People’s Mojahedin Organization of Iran (PMOI), as young as 13 years old, were executed in the 1980s for their political activities.”

“The regime’s current gambit is to sentence the juveniles to execution, keep them in prison until they turn 18, and then execute them. There are scores of juveniles currently on death row.”

“The stark reality is that there has been no respite under [the Iranian regime’s President Hassan] Rouhani who some try to prop up as a ‘moderate’. In reality the pace of executions has increased dramatically during his tenure, and that includes the execution of juveniles and women,” he added.