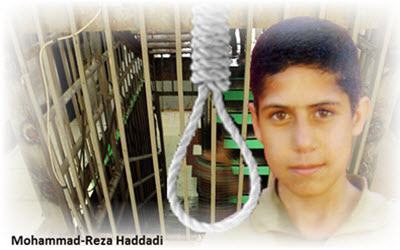 NCRI – Iran’s fundamentalist regime may be planning to execute a man for a crime allegedly committed when he was only 15 as early as tomorrow, May 31.

Mohammad-Reza Haddadi, who was born on March 17, 1988 and is now 28 years old, has been imprisoned in Iran for the past 13 years. He is currently locked up in a prison in Shiraz, southern Iran.

The authorities in the office of implementation of court verdicts have informed his family that they plan to execute him on Tuesday, May 31.

His father told international media organizations that his son had also called his family to say that the regime plan to move him to the ward for implementing verdicts tonight.

Mohammad-Reza Haddadi allegedly told a court hearing on October 30, 2003 that he had killed an individual that he had tried to rob. However, in a letter to the court on November 7, 2003 he said that he had been offered money by another suspect to testify to the murder on the basis that he would not receive a harsh sentence given that he was a minor. He reiterated in his letter that he had been fooled by the other suspect and that he did not have a role in the murder.

At least 118 people have been executed in Iran since April 10. Three of those executed were women and two are believed to have been juvenile offenders.

There have been more than 2,300 executions during Hassan Rouhani’s tenure as President. The United Nations Special Rapporteur on the human rights situation in Iran in March announced that the number of executions in Iran in 2015 was greater than any year in the last 25 years. Rouhani has explicitly endorsed the executions as examples of “God’s commandments” and “laws of the parliament that belong to the people.

Ahmed Shaheed, the United Nations special rapporteur on human rights in Iran, told a news briefing in Geneva on March 10 that Iran’s regime is the lead executioner of children globally. This is “strictly and unequivocally prohibited under international law,” he said.
“The number of juvenile offenders executed between 2014 and 2015 – which is reportedly 16 – was higher than at any time during the past five years,” Shaheed said.

Ms. Farideh Karimi, a member of the National Council of Resistance of Iran (NCRI) and a human rights activist, last week called for an urgent response by the United Nations and foreign governments to the recent spate of executions and the appalling state of human rights in Iran.

On January 30, activists monitoring Iran recorded the 27th execution since the beginning of the year. Given the Iranian judiciary’s penchant for secrecy, it...
Read more
Stop executions in Iran

With the execution of Javid Dehghan, a Baluch political prisoner on January 30, the number of executions in Iran, only in January, reached 27. In addition,...
Read more
Iran Human Rights

The Iranian regime executed at least 27 prisoners in January. With an additional 225 executions in 2020, the regime holds the record as the...
Read more