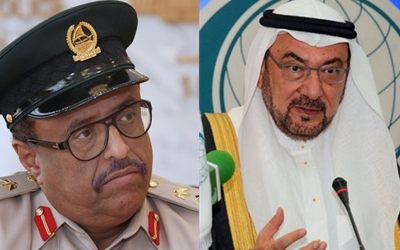 According to Saudi Alriyadh newspaper on Monday October 31,”Iyad Amin Madani, the Secretary General of the Islamic Cooperation Organization, called the Foreign Ministers of the executive board members to take part in an extraordinary meeting on Saturday 5 October at the Secretariat Headquarters in Jeddah. The meeting is to discuss a dangerous development symbolized by a ballistic missile attack to Mecca at the hands of Houthi militias and Ali Abdollah Saleh.”

In another development in response to the missile attack by Houthi militias to Mecca, the Deputy Chief of Dubai Police, Lieutenant General Dhahi Khalfan, has called for the expulsion of Iranian diplomatic missions from Arab countries.

According to CNN Arabic on Monday October 31, the Deputy Chief of Dubai Police said in his series of tweets that “this indifference in dealing with the Iranian regime doesn’t make sense. Expulsion of Iranian diplomatic missions following the attack to Mecca is a religious obligation.”
Khalfan added in his tweets: “boycotting the Iranian regime is a necessity required for the (Persian) Gulf security. What can be more important than attempting to attack Mecca!”

He stressed that “our countries should treat Iran as the turbaned terrorists deserve. This regime should understand that disrupting the security of the (Persian) Gulf as well as Arab countries will not be tolerated, otherwise these turbaned leaders’ bastards will insist on their aggression.”

Previous articleIran: Studying in the Ramshackle Schools
Next articleIran: Widespread Protests Outside the Regime’s Parliament Simultaneous With Rouhani’s Presence