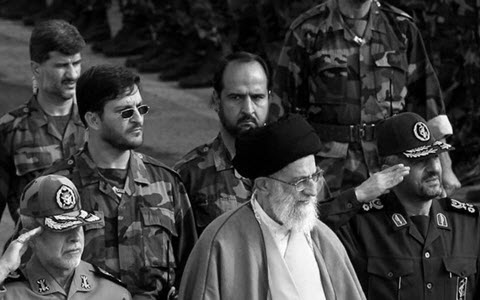 NCRI – Iran regime’s special elite unit, the Quds Force – was established by former Supreme Leader Ruhollah Khomeini at the end of the eighties as part of the Islamic Revolutionary Guard Corps (IRGC). Its purpose was to spread the so called revolution outside the country and it became responsible for foreign operations. Its mission spread across to neighbouring countries and has now ended up all over the world.

It has been in contact with terrorist groups since its inception and uses militant Shia organisations to further its agenda of creating a supreme Shiite empire that Iran would one day control.

The Quds Force also works in cooperation with Hezbollah to stop so called Western influence in the region and to destroy the Gulf States. Hezbollah agents infiltrate these countries (notably Saudi Arabia and Bahrain) and cause chaos to attempt to bring about the fall of the monarchies so that a Shiite administration can take over.

There have been numerous terror attacks like the bombing of French and US military barracks and the US Embassy in Beirut in 1983. Then in 1996 there was the Khobar Towers bombing in Saudi Arabia. As well as organising terror attacks, the Quds Force leads violent public demonstrations.

In Iraq, the Quds Force took the opportunity to try its luck there after Saddam Hussein was killed. However, it faced great difficulty after the Bush administration planned to invade Iran because of its nuclear ambitions. Iran therefore decided to fight the US coalition troops with the help of Iraqi Shia insurgent groups.

Iran wanted the Iraq war to cost the US a large number of casualties so that it would pull out. Iran would then fill the void without getting involved in the war.

When former regime’s president Mahmoud Ahmadinejad took office in 2005, he envisioned an Iran that was a rival to the US and one that could take over the entire region.

A year later, the US put Nouri al-Maliki in power in Iraq. This turned out be to a big mistake because al-Maliki had spent a long period of time in Iran and he soon became greatly influenced by Tehran.

When President Obama took office, the Iranian regime enjoyed the so called “golden years” where the US adopted a policy of appeasement. Obama ended US involvement in Iraq and the Quds Force entered. Once the last remaining US forces left, Maliki started to purge the Sunni politicians in the country and Sunni Vice-President Tariq al-Hashimi was accused of managing death squads. He was sentenced to death after being tried in absentia (because he fled to Kurdistan).

By 2015, Iran seemed to control most of the country and General Qassem Soleimani, leader of the Quds Force, led troops into Iraq. Iran was in full control of the authorities at this stage and Iraq soon came to rely on Iran for supplies, medication and electricity among other things.

In past years, Soleimani combined several Shia militia groups creating the Popular Mobilisation Unit (PMU). This gave Soleimani a significant amount of control over the military in Iraq.
Now that the ISIS threat has been as good as neutralised, political and military control of Iraq is mainly in the hands of Iran regime.

The same is set to happen in Syria if the international community fails to intervene.

This past Tuesday, the Belgian parliament held a committee hearing on Foreign Affairs, very nearly one month after the conclusion of a terrorism trial...
Read more
Latest News on Iranian Terrorism