Iran Regime’s Belligerence Needs to Be Put to an End 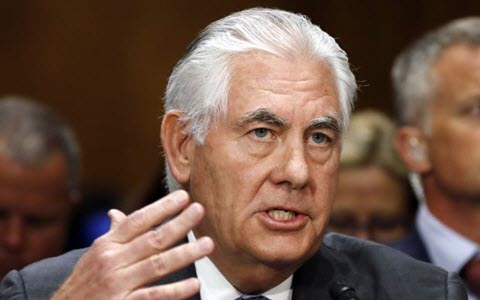 NCRI – A few months ago, United States Secretary of State Rex Tillerson gave certification that Iran was complying with the terms of the 2015 nuclear deal. The certification is required every 90 days and it will soon be time for the next one.

His predecessor, John Kerry, rubber stamped the certification but the current Secretary of State is hopefully going to take the opportunity to act. If he speaks up about Iran’s belligerence and its numerous violations of the deal it will pave the way for Congress to act.

In fact, four Senators have advised Tillerson to do just this. Republican Senators Tom Cotton, R-Ark., Ted Cruz, R-Texas, Marco Rubio, R-Fla., and David Perdue, R-Ga. sent a letter to Tillerson urging him to tell the truth and say what is evident. In other words, make it clear that Iran has disregarded the terms of the nuclear deal. They reminded him that the deal itself states that the regime should be punished for acts of defiance regarding the deal.

The Senators emphasised that if Iran keeps getting a free pass for every aggressive or provocative act it made, like it did with the Obama administration, it will never change its ways and will continue to terrorise the world.

Despite the nuclear deal, the regime is continuing to work on its nuclear weapon and missile program. They agreed to a certain amount of centrifuges with Obama, but it actually operates a whole lot more. It is also storing more heavy water than it should be. However, the most worrying of all is that the regime is refusing access to nuclear inspectors at its facilities. If it is not allowing inspections to be carried out, as agreed, there is clearly something to hide.

The certification has to be granted every 90 days so that the national interest of the United States are protected. However, in their letter, the Senators point out that the national security interests are endangered if Iran is left unchecked.

They wrote: “In light of Iran’s malign actions since the signing of the [nuclear deal], the only reasonable conclusion is that the full suspension of U.S. sanctions is not in the vital national security interests of the United States and that Iran has consistently violated the terms of the [nuclear deal].”

It is thought that Tillerson will treat Iran aggressively. Although he granted certification last time, it is presumed that this was to keep things as they were while Trump was taking office. He criticised President Obama’s lax approach to Iran saying that “strategic patience” didn’t work. This is maybe an indication that the buck stops being passed on now.

Previous articleIran Regime’s Official “Proud” of Role in 1988 Massacre
Next articleA News Report and All This Fear Inside Iranian Regime!