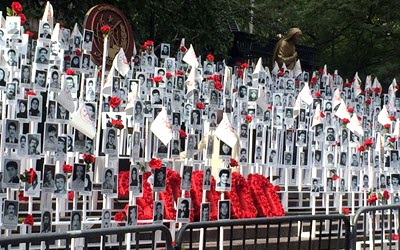 NCRI – Iran’s judiciary news agency published a piece titled, “Effort to replace the murderer with the martyr,” over remarks made by Supreme Leader Ali Khamenei regarding his failure to engineer the presidential election.

“Those who seek to tarnish the image of our establishment remind everyone about the 1980s… They see no shame in changing the place of the ‘murderer’ and ‘martyr’!” the piece reads.

“This all began in August 2016 when the sound file of the late Montazeri was published; this sound file was published at a time when anti-revolution elements and media outlets launched a major hype against the establishment during the anniversary of the (PMOI) executions. The (PMOI) had also held a gathering in Paris,” the article continues.

“Montazeri’s unwise defense of the (PMOI) led to letters of dispute between him and (Khomeini). Three decades these bold moves have become sources of hatred against (Khomeini) and the establishment…”

Head of the Motalefe faction in an interview with this news agency acknowledged the fact that Khamenei failed in the election.

“These remarks by Khamenei are a warning for us, when he said be careful that they not change the place of the martyr and murderer in the 1980s. Those who describe the 1980s as the climax of execution and prisons must be identified to the public, and be held responsible for their remarks that have made the enemy happy,” Habibi said.

“During the election there were those who said so many wrong remarks. The 1980s will be remembered in our history,” he added.

On the other hand, based on a video clip placed on the Internet, Mehdi Khazali, a presidential candidate disqualified by the Guardian Council in this round, made remarks about the role of conservative cleric Ebrahim Raisi in the 1988 massacre of political prisoners.

“… If we seek to take action based on the laws of this very Islamic republic, he would have to be executed 20,000 times for 20,000 summary executions.”

Previous articleIran: More Rift and Crisis at the Top of the Regime, Khamenei Lashes at Rouhani
Next articleIran Regime Seeking to Establish Militias in Syria