Iran Regime’s Minister of Foreign Affairs Admits: All Senior Officials Knew About the Attack on the Saudi Embassy 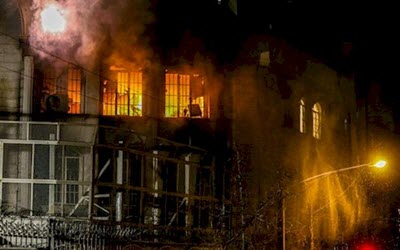 NCRI – On May 4 2017, Foreign Minister Zarif in his speech on the occasion of Teacher’s Day at the Faculty of International Relations, in explaining the foreign policy of the regime and the current coordinates of the regime in international relations, referred to what he called “badly managed” events such as attacking the regime mobs on the Saudi Embassy in Tehran and Saudi Consulate in Mashhad and inadvertently admitted that all the leaders of the regime knew about the attack but tried to say that all were opposed to.

Zarif said: “On the day of attack on the Saudi Embassy, we were in the Supreme National Security Council meeting and we all agreed that if the Saudi Embassy is attacked, it gives an excuse for a new mischief by the Saudis, and this is what happened.”

Zarif’s inadvertent admission is while so far, the regime was calling its thugs’ attack on the Saudi Embassy as the attack of “angry people” and denied any organized movement in this regard. And now the regime’s Foreign Minister admits that top regime officials, including the President, the Speaker of the Parliament, Head of the Judiciary, Vice President, Secretary of the Supreme National Security Council and Khamenei’s representative in the council, Chief of Staff of the Armed Forces of the regime, the chief commander of the IRGC, Minister of Interior and Minister of Intelligence and Foreign Minister were aware about the issue. He claims though that it was consensus that if the embassy was attacked, it would give excuses to the Saudis, but who among the top regime officials was defending this and ultimately claiming that the Supreme National Security Council was unable to prevent it, is ludicrous. The reality is that this attack was organized and was carried out with the full knowledge of the highest level regime officials.

Zarif went on to discuss the critical situation and the turning of political atmosphere especially after coming of Trump to power and in particular change of American policy in Syria after the chemical attack on Khan Sheykhun, and revealed the regime’s fear from what is going to happen in Syria.

“When Mr. Trump became the US President, some said Trump had internal problems and would not want to enter crises abroad. One incident, the chemical situation in Syria, which is even worse if it is fake, caused US program to change 180 degrees. Now some say it was predetermined… whatever it was, whether a conspiracy or design, caused the history to change. An incident in Syria caused the upset and this is due to the situation of international relations. During bipolar era, it was not seen often that an incident could change the course of history. So we need to pay attention to these developments and analyze it.”

Previous articleIran: Ministry of Intelligence Was the Negotiating Partner With U.S. To Exchange Prisoners
Next articleThe Financial and Manpower Crisis of Lebanese Hezbollah Militia Affiliated to Iran Regime