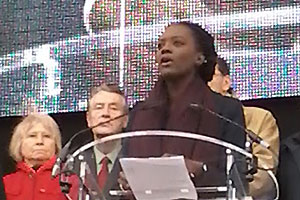 ‘Hassan Rouhani isn’t a moderate leader and secular people, democratic people and women are brutally repressed’ in Iran and the inhuman nature of the regime has not changed, former French human rights minister Rama Yade told thousands of supporters of the Iranian opposition on Thursday in Paris protesting the visit to France by the president of the clerical regime.

Mrs. Rama Yade said ‘Rouhani’s visit to Paris must be an historical opportunity for such rallies,’ adding that the ‘death penalty must be abolished; political prisoners must be freed; freedom of speech must prevail; censorship must stop; freedom of conscience for everyone must prevail; there must be equality between men and women.’

Below is an English translation of Mrs. Rama Yade’s speech in the Iran rally in Paris on January 28, 2016:

Over 1000 executions in 2015, at least 2000 executions under Rouhani’s mandate; at least 160 minors sent back to prison, 57 women executed; that is the sinister report regarding human rights under Hassan Rouhani’s regime.

Yet, at the same time, turning a blind eye to this reality, businessmen and political representatives succeed one another in Tehran, and today in Paris, to conclude nuclear agreements, and business agreements.

This quest for profit becomes even more frantic since sanctions against Iran are being lifted.

And one could think that for the Iranian people which purchasing power dropped, will enjoy it, but that is not the case, because the economy is controlled by the politics.

I want to say that Iran can’t claim being a part of the UN as long as the Iranian people isn’t free; It can’t be respectable until the people is respected; Iran can’t make peace with the Middle East including against ISIS, without renouncing to its warmonger strategy.

Rouhani’s visit in Paris must be an historical opportunity for such rallies.

We must tell the French people that Rouhani isn’t a moderate leader; that secular people, democratic people, women, are brutally repressed; that there’s in Iran a great will to rise up and fight for freedom.

To those who think the Iranian government changed, they need to read again the words of the official Iranian press after the attacks in Paris.

A government which holds the record of capital punishments hasn’t changed its inhuman nature.

The mediators of the nuclear agreement made a terrible mistake by not linking them to the respect of human rights.

Death penalty must be abolished; political prisoners must be freed; freedom of speech must prevail; censorship must stop; freedom of conscience for everyone must prevail; there must be equality between men and women.

Previous articleEx-Italian FM urges Europeans not to forget principles in dealing with Iran
Next articleIran: 24 Baha’is sentenced to a total of 193 years in prison