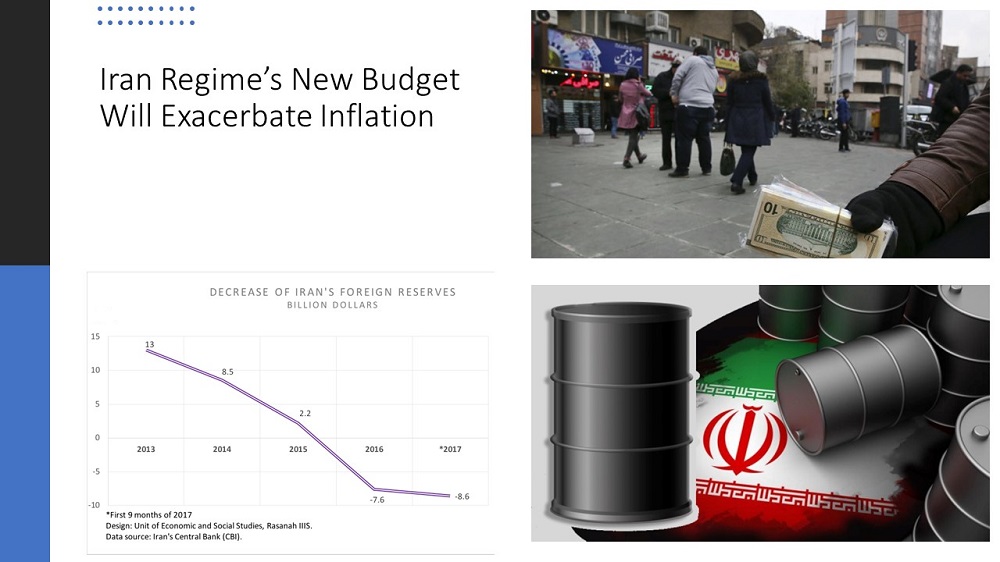 In his proposed budget for the upcoming Iranian calendar year, the Iranian regime’s president, Hassan Rouhani, has used the exchange rate of 42,000 rials per U.S. dollar for calculating the income from imports of essential products and medicines. According to the government’s spokesperson, around $10 billion of presumed oil revenue is allocated to these imports.

In addition, given the likely decline in tax revenues due to the economic recession and the supposed 15% increase in public employees’ salaries, the budget deficit is likely to be very large and perhaps unprecedented during the next year.

The government, therefore, is in dire need of oil revenues. The regime’s economists have repeatedly emphasized the ineffectiveness of government currency policy in controlling the inflation rate of essential products and medicines. Given these two points, the government’s decision to use the exchange rate of 42,000 rials per dollar and allocating its nearly total oil revenue to this policy raises this question that how the regime could easily make such a dangerous decision?

The Iranian regime has decided to use the exchange rate of 42000 rials per dollar as the basis of the country’s import and export. Meanwhile, the exchange rate at the free market is around 140,000 rials per U.S. dollar. So, given its difficulties in selling oil, the regime will face a serious shortage in its budget, and it must either use the Central Bank’s resources or print banknotes to fill this economic gap. This economic policy will ultimately result in a much higher inflation rate.

What is the role of the Central Bank in this tragedy? The Central Bank would be forced to secure monetary base expansion and start printing unsecured banknotes and would have to wait for inflationary effects soon. If true, then the secret of the regime’s currency decision would become apparent. The Iranian regime has never ignored the oil revenue and has made a profit on it without mentioning it in the budget.  The only point is that instead of receiving the $9.8 billion from the importer, it comes from the Central Bank. These techniques and calculations of Rouhani’s government are to satisfy the government, their business supporters, and their political representatives, even at the expense of rising inflation and liquidity, which in the subsequent period of the country’s economic process, would lead to more money and currency swings. They would inevitably lead to further inflation.

Every day, due to the Iranian people's economic and social hardships, the state-run media warn of another uprising on a much larger scale. On Tuesday,...
Read more
Iran News Now