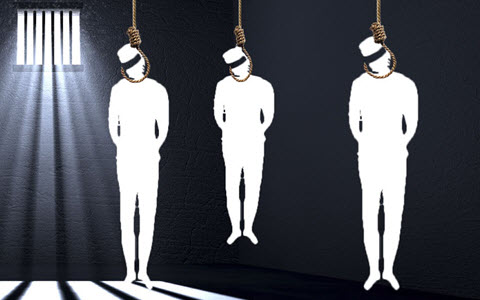 According to the families, the death sentence of at least 13 prisoners will soon be implemented.

A large number of the families of the death row prisoners had gathered outside the prison on Tuesday, July 11, behind the prison doors.

Three prisoners who are supposed to be executed on Wednesday, July 12, are identified as Mehdi Ahmadi, Hamid Ismami and Nader Ahmadi.

According to Gohardasht prisoners, death row prisoners who have been in prison for more than 10 years have given 45 days to get consent otherwise their death sentence will be enforced.

Some of the executions carried out by the clerical regime in the past 3 weeks are as follows:

10 July 2017 – Two prisoners were executed in the prisons of Mahabad (western Iran) and Rasht (northern Iran).

9 July 2017 – A prisoner was executed in central prison of Arak.

5 July 2017 – The death sentences of at least seven prisoners were implemented in Gohardasht prison in Karaj.

4 July 2017 – The death sentence of a man in Ghaemshahr prison (northern Iran) was enforced.

4 July 2017 – two other prisoners were also executed in central prison of Orumiyeh. On the same day, the death sentences of two prisoners were implemented in public on the side of a sports hall in the city of Torbat-e Haidariyeh.

On 12 July 2017, the National Council of Resistance of Iran reported in a statement that the inhuman regime of the mullahs has hanged at least 57 prisoners in Iran Since the Beginning of July.

Previous articleFactional Feuding and Rift, Continues at the Top of the Iran Regime
Next articleIran: Iran Regime’s Brutal Suppression of Defenseless People

Hamideh Taati - 26th May 2020
THE CONTENT OF THIS PAGE WILL BE UPDATED WITH THE LATEST NEWS UPDATE: 4:00 PM CEST Lawyer Soheila Hejab Violently Transferred to Qarchak Prison Human rights lawyer...