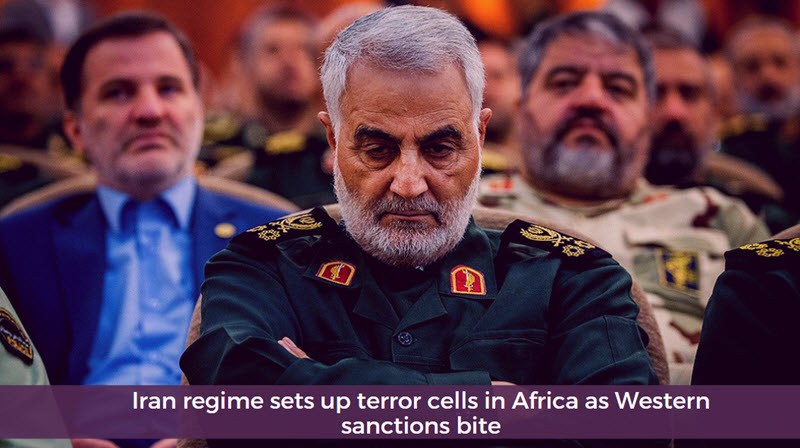 The Iranian regime is setting up a network of terror cells in Africa to attack U.S. and other Western targets in retaliation for Washington’s decision to impose sanctions against Tehran, according to Western security officials.

The new terror network has been established on the orders of Qassem Suleimani, the head of the Iranian regime’s Islamic Revolutionary Guards Corps Quds Force (IRGC-QF), according to a report on June 24, 2019 by Britain’s Daily Telegraph.

The U.S. State Department added the IRGC to its list of Foreign Terrorist Organizations (FTO) in April 2019.

The aim of the new terror cell is to target U.S. and other Western military bases on the continent, as well as embassies and officials, The Telegraph wrote.

The Iranian cells are said to be active in a number of African countries including Sudan, Chad, Ghana, Niger, Gambia and the Central African Republic, the report added.

“Iran is setting up a new terrorist infrastructure in Africa with the aim of attacking Western targets,” a senior Western security source told The Daily Telegraph. “It is all part of Tehran’s attempts to expand its terrorist operations across the globe.”

Intelligence officials say the Iranian regime has been working on the new terror network for the past three years since signing the nuclear deal on freezing its uranium enrichment activities with the U.S. and other major world powers in 2015.

The operation is being organised by Unit 400, a highly specialised section of the Quds Force which is run by Hamed Abdollahi, a veteran IRGC officer who was designated by the U.S. as supporting terrorist activity in 2012.

The African cell is said to be run by Ali Parhoon, another senior Iranian officer in Unit 400. Details of the terror cell’s existence were uncovered following a series of arrests in Chad in April.

Investigators found that the Iranian regime was behind the recruitment and training of men between the ages of 25-35 with the aim of committing terror attacks against Western targets on the continent.

There are estimated to be around 300 militants who have been recruited by the Revolutionary Guard and have undergone rigorous training at Iranian-run training camps in Syria and Iraq, The Telegraph wrote.

The last batch of recruits were trained at an Iranian base in the southern Iraqi city of Najaf. Tehran’s attempts to establish a new terror operation in Africa follow revelations in The Telegraph earlier this month that British security officials caught terrorists linked to the Iranian regime stockpiling tonnes of explosives on the outskirts of London.

The British authorities believe this cell was also set up in 2015 after Tehran signed the nuclear deal.

U.S. diplomatic officials say a warning has been circulated to American diplomatic and military missions in the countries where Iranian militants are said to be operating, as well as missions of other Western countries, including Britain, France and Italy, the report said.

The revelation that the Iranian regime is setting up a new terror network in Africa comes at a time when Tehran has been accused of stoking tensions in the Gulf after Revolutionary Guard commanders confirmed that they were responsible for shooting down a US military drone operating close to the Strait of Hormuz.

In addition Iran’s regime has been blamed for carrying out attacks on a number of oil tankers operating in the Gulf that were damaged by mines.