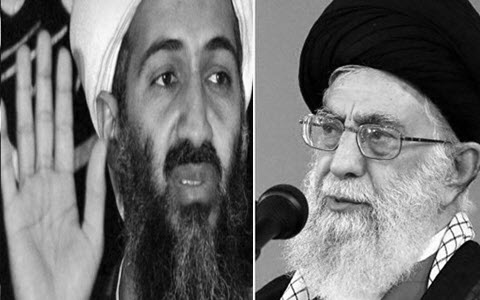 NCRI – The Iranian Regime sheltered al Qaeda operatives involved in the plotting of 9/11 to use as leverage against the US in order to attack the popular Iranian resistance, according to recently released CIA documents.

The documents, seized from the Osama Bin Laden complex after he was killed by Navy SEALS in 2011, reveal a long history between the Iranian Regime and the terrorist group.

It notes that, following the 2003 US invasion of Iraq, Iran held these senior al Qaeda plotters (including Bin Laden’s son) in order to threaten the US into turning over all members of the Iranian Resistance group Mujahedin al-Khalq (MEK) who were living in exile in Camp Liberty and Ashraf in Iraq.

If the US had bowed to Iran’s pressure, then it would surely have been the end for those dissidents. Iran has a long history of imprisoning, torturing, and executing political opponents and freedom fighters, as they did in the 1988 Massacre, where they killed 30,000 political prisoners (mainly members and supporters of the MEK) in just a few months.

Even though the US did not turn over the MEK to Iran, it still didn’t mean an easy life for the dissidents. They were subjected to constant attacks by the Regime and its regional proxies, which got even worse following the US withdrawal from the Middle East in 2011.

Eventually, in 2016, the MEK members in Iraq were moved to safety in Albania, following a tripartite agreement between the US, the UN, and Albania. However, there are many more who still live under the Iranian Regime in fear for their lives.

That is not the end of the Iranian Regime’s link to al Qaeda, far from it.

Ryan Trapani, a spokesman for the CIA, said: “Documents collected during the bin Laden raid, which have been declassified, indicate Iran and al-Qaeda have an agreement to not target each other. The documents indicate bin Laden referred to Iran as the ‘main artery’ for al-Qaeda to move funds, personnel and communications.”

Last month, Donald Trump noted that Iranian proxies had provided training to al Qaeda operatives involved in the bombings of the U.S. embassies in Kenya and Tanzania in 1998.

In the same speech, he revealed that Iran had indeed sheltered al Qaeda after 9/11, and was quickly pounced upon by, among others, Paul Pillar, the former senior intelligence analyst who signed off on the conclusions that Iraq had WMDs.

Well, it turns out that Trump was right and Pillar was, again, wrong.