Iran Regime Sold the Corpse of an Executed Prisoner for $3,000 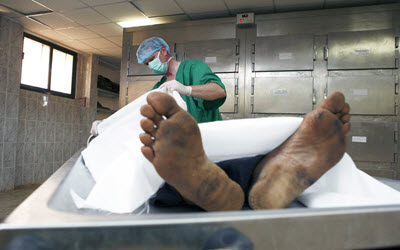 NCRI – Selling unclaimed corpses in Iran has been widely noticed in recent weeks after it was found that medical colleges are paying up to $3,000 per corpse in the black-market, according to new reports.

The state-run Rokna news agency reported on February 15 that the lack of deceased bodies has forced medical students to seek help from the black markets to buy corpses to use as cadavers for medical research purposes.

The report said around 100 unclaimed corpses were found in Tehran’s streets, with doctors urging that they should be handed to medical schools so that students may benefit from them.

Rokna quoted Niousha Mohammadzadeh, a practicing doctor, as saying that her college had purchased three bodies, one of which belonged to a man who was executed in prison and who didn’t have immediate relatives. His corpse cost 10 million toman ($3,000), she said. The second body belonged to a homeless person and the third body was of an unidentified person.

Trading human organs is currently legal under the Iranian regime’s law. The poor are often exploited to sell body organs such as kidneys, a practice that has spread widely in recent years in Iran.