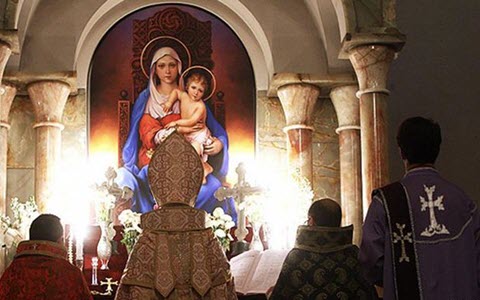 NCRI – Reports are surfacing about more religious persecution in Iran.

In the city of Dezful in southwestern Iran, a convert to Christianity has been arrested. This information was provided by an Iranian Christian rights advocate group.

The man that was arrested is named Mohammad Ali Torabi. Security officers arrested him at his office in the Qal’a Sayyed area of the city on Tuesday October10th. He was transferred by the officers to an unknown location and his family have not yet been given any details about where he is. Mr Torabi is in charge of the Serenity Message Church.

Two other Muslims who has recently converted to Christianity were also arrested at the same time, but they have reportedly been released after undergoing an interrogation.

A website that is dedicated to reporting about Christians in Iran, Mohabbat News, has also mentioned that two other Christian converts – Sara Ne’mati and Mehrdad Houshmand – have recently been summoned by security agents of the country’s Islamic Revolutionary Guards Corps (IRGC) on Monday October9th.

This happened in the Iranian capital Tehran and they were jailed after a very long interrogation process.

In the past few months there have been a number of Iranians that converted to the evangelical church that have been arrested. In a lot of these incidences, those who were detained were accused of acting against the national security interests of the country because they started up home churches or participated in Christian ceremonies.

There have been numerous condemnations of the regime’s actions, with people slamming the Iranian authorities for such baseless arrests. Religious minorities have been mistreated in the country for many years and a large number of people have been arrested for peacefully and privately partaking in activities related to their faith.

A worldwide Christian solidarity organisation said in an interview on the subject that the accusations against those that have been arrested are “illusory”. Furthermore, these charges go to show that the Iranian regime is discriminative towards religious minorities.

Last year, Human Rights sources, expressed their grave concern for the Christian minorities that have been handed very long prison sentences. It pointed out that Christians are a recognised and official religious minority in the country, yet they are still being treated very badly and like criminals.

“Christians are recognized as an official religious minority in Iran’s constitution, but the state continues to persecute members of the faith, especially converts.”

The human rights organizations urged the authorities in the country to put an immediate end to this “disturbing trend” of arresting and jailing Christians. and pointed to Article 18 of the International Covenant on Civil and Political Rights. The article, ratified more than forty years ago, states that everyone is entitled to “freedom of thought, conscience and religion”.

Iran has been called out on many violations of human rights in other areas too. Women are not treated as equals and the population of the country is denied many freedoms. There have been countless cases of young people being arrested for attending mixed-sex parties and people have been arrested for being mal-veiled or having Western haircuts or clothes.