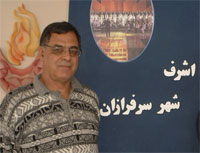 The France-based leader of the People’s Mujahedin Organisation of Iran (PMOI), Maryam Radjavi, issued a statement condemning the execution of Saremi in Tehran’s Evin prison.

“This great crime only reflects the regime’s inability and frustration in the face of the resolute Iranian youths and members of PMOI who are determined to overthrow the clerical rule and establish freedom and the rule of people in Iran,” the statement said.

Iranian news agency IRNA reported that Saremi, 63, a member of the PMOI, the main Iranian armed opposition group, was hanged for participating in activities of counter-revolution groups and providing them with information.

“Following Ali Saremi’s execution, his daughter was arrested by the regime’s henchmen this morning outside Evin prison,” the PMOI statement added.

Previous articleIran: Members of family of Ali Sarami’s and other political prisoners arrested by authorities
Next articleEuro MP Condemns execution in Iran and Khamanei and Ahmainejad be tried for crimes against humanity