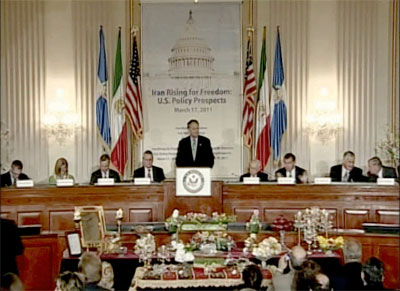 WASHINGTON, March 19, 2011 /PRNewswire-USNewswire/ -- On 17 March 2011, in a bi-partisan conference on Capitol Hill, titled, "Iran Rising for Freedom—U.S. Policy Prospects," former top officials of the Obama as well as Clinton and Bush administrations joined senior Members of Congress. They urged the Obama Administration to adopt a new policy in support of Iranians who are demanding change in Iran and remove Iran's principal opposition, the Mujahedin-e Khalq (MEK) from the State Department's list of Foreign Terrorist Organizations. They also called for the protection of Camp Ashraf, Iraq, home to the 3,400 members (including 1,000 women) of MEK.

On the occasion of the Iranian New Year, Nowrouz, General James Jones had the following for the Iranian people: "I propose three gifts. The first one is successfully delisting the MEK, the second one ...is insuring the security of the people of Camp Ashraf and the third is to support the popular movement for freedom as expressed by Iranians both inside and outside of Iran." General Jones concluded, "We should remove all shackles that currently impede the human potential that exists to bring about democratic change with regard to the regime that currently governs Iran. We should give the people of Iran the opportunity to get control of their destinies and experience freedom not in ten years or 20 years but beginning this Iranian New Year."

Ileana Ros-Lehtinen, chair of the House Foreign Affairs Committee (R-Fl), spoke of the need to protect the "wonderful residents of Camp Ashraf." She added, "They deserve our full protection, they've not gotten that from the Iraqi forces, and it is up to us to make sure that the Iraqi Government complies with all of the accords that they have signed; shame on us if we don't hold them accountable." She also reminded everyone that the House Foreign Affairs Committee is "carefully" studying the "important topic of de-listing the MEK."
Governor Dean stated that, "The Mujahedeen-e-Khalq, (MEK) is not a terrorist group, and we need to delist them immediately. The MEK is a movement for freedom and democracy in Iran... The MEK has 3,400 brave people who believe in democracy just as firmly as those people in Benghazi, Libya as well as the people in Tahrir Square, Egypt did; hence, we cannot abandon its members in Camp Ashraf, Iraq. If we remove the MEK from the U.S. terrorist list, it will be possible to protect the people of Ashraf.
"
Representative Brad Sherman (D-CA), Ranking Member of the Subcommittee on Terrorism, Nonproliferation, and Trade said, "In 1997, our State Department was desperate to find a way to create peace and harmony and love between the people of the United States and the mullahs running things in Tehran. So the State Department decided to list the People's Mojahedin Organization of Iran [MEK] as a foreign terrorist organization. I have to ask the State Department, how is that peace, love, and harmony thing working out? Have the centrifuges [to enrich uranium] stopped spinning? Have we heard reasonable comments from Ahmadinejad, or instead has this [terrorist designation] been a manifest failure of our foreign policy?...It is about time that we examine what the European Union did in 2009, and that was to remove the MEK from its terrorist list."

In part of his remarks, Judge Michael Mukasey stated that, "There is simply no basis in law or in fact for continuing MEK on the State Department's list of foreign terrorist organizations. There are many reasons, including MEK's close cooperation with the United States in exposing Iran's nuclear program for removing MEK from that list. The MEK was kept on the terrorist list, in part, out of fear that Iran would provide Improvised Explosive Devices (IEDs) and other deadly devices to Iraqi insurgents fighting and killing U.S. troops, and of course the Iranian regime has done that even as MEK has continued to be on the list."

General Hugh Shelton specified that, "The largest organized resistance to Iran's current regime has been declared a foreign terrorist organization by the Department of State. That designation in my opinion was a mistake, one that we should rectify not tomorrow, but immediately." General Shelton added, "To add insult to injury we have Camp Ashraf where [Iraqi Forces] stand by today as the 210 loudspeakers shout out obscenities heard by women and children and just the idea of living with that is something that says we need to take action right now... I would submit today the U.S. should add our leadership to an international effort to go in and protect the people of Camp Ashraf, since a recognized international principle is to protect."

In celebration of the Iranian New Year, Representative John Lewis (D-GA), who is called "the conscience of the U.S. Congress," wished a, "Happy New Year to Iranians in Camp Ashraf and the people in Iran committed to peace and to change," and concluded: "Time is always right to do right. The time is now. Not next week, not next month, not next year, but now."

Governor Tom Ridge stated that, "All the UN resolutions combined would not have the same impact as one decision made by the Obama administration, removal of the MEK from the terrorist list, pure and simple. The MEK is not asking for creation of a no-fly zone or other military intervention on its behalf. It is not asking us to assault the fortress at Normandy. The MEK is only asking to be removed from the terrorist list."

Congressman Ted Poe who has sponsored H.Res.60, "Urging the Secretary of State to remove the People's Mojahedin Organization of Iran from the Department of State's list of Foreign Terrorist Organizations," said, "It's time for the UNAMI team under the protection of the United States to be set up permanently in Camp Ashraf to monitor the situation and ensure further violations don't occur against the human dignity."

Ambassador Dell Dailey called on Secretary Clinton "to revoke the designation" of the MEK. "All of the Middle East is erupting and crying for democracy. We must not stand in the way. Immediate revocation [of designation] is essential," he concluded that delisting, "Will tell the people of Iran that the United States is with them."

Ambassador Paula Dobriansky stated that, "The recent uprisings in North Africa drew inspiration from the 2009 democratic protests in Iran... Women and youth are indispensable agents of change; their leadership needs to be recognized and their efforts supported... Maryam Rajavi ... recognizes in her Ten-Point Plan for a future Iran that there would be complete political and social gender equality, including equal participation in elections and the abolition of discrimination against women. We must support these women activists. This platform is one that underscores the basic rights not only of women but of all Iranians."

Director Louis Freeh called into question the evidence on the basis of which the Mujahedeen-e-Khalq was designated. "There is absolutely no credible evidence, we think even on a classified basis, which justifies the maintenance of the MEK on the Foreign Terrorist Organizations list. In fact, all the evidence militates against maintaining the terrorist designation. What Secretary Clinton needs to do is delist the MEK, protect the heroes in Camp Ashraf, and make sure that we support freedom in Iran as opposed to standing silent, and by our silence facilitating the murderous persecution of the Iranian regime."