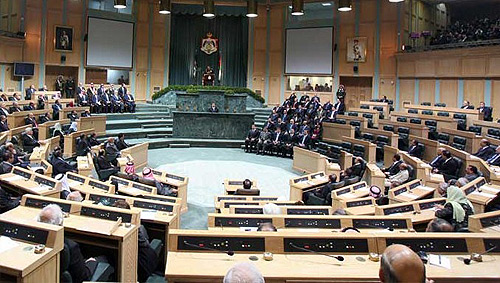 A mojarity of members of Jordanian Parliament have demanded that the medical blockade around Camp Liberty in Iraq is lifted immediately, that residents have their personal protection weapons returned and the camp is recognised as a refugee camp by the UN.

The statement signed by 71 Jordanian MPs said: “We stand with the Iranian people and the 10-point plan of Mrs. Maryam Rajavi, President of the National Council of Resistance of Iran (NCRI), that advocates a democratic non-nuclear Iran based on the separation of mosque and the state, respect for individual rights and freedoms, gender equality, and peaceful coexistence.”

MPs said that Iran must allow 'intrusive inspections' of military sites as part of any agreement with the West on ending the regime's nuclear ambitions.

They said: "According to reports by the United Nations and human rights defending organizations, Iran has the highest rate of execution in the world per capita and the human rights condition has deteriorated during the office of President Hassan Rouhani.

"Reporters Without Borders has described Iran as the biggest prison for reporters and Freedom House has recognized Iran as the number one state in censorship of the internet in 2014.

"A number of political prisoners, including those from ethnic and religious minorities, have been executed. One of those executed had just given monetary contribution to the People's Mojahedin Organization of Iran (PMOI/MEK) television station."

The MPs also condemned the role of the Qods Force and Hezbollah in defending Syria's Bashar Assad. Whose dictatorship has led to the loss of life of 300,000 people and has the Middle East engulfed in crisis.

He added: "Concurrently, Iran has expanded its dominion over Yemen through the Houthi militias. Regime’s officials and Qods Force commanders admit their intervention in the region and brag about four Arab capitals being under their dominion. They say that if they do not fight in Iraq and Syria, their rule will be threatened in Iran.

"However, despite all concessions made to Iran by the P5+1, this country is reluctant to forgo its nuclear weapons program which it needs to impose its fundamentalist hegemony over the region.

"Twelve years of experience has shown that the sole pathway to avert military conflict is through pressing Iran and imposing further sanctions."

1. In all relationships with Iran, the situation of human rights should be considered as a factor. Iran needs to end executions, release the political prisoners, and respect the rights and liberties of the Iranian people.

2. Iran is at the heart of the problem in our region and not part of the solution and it must be forced to leave Iraq and Syria. This is the essential condition for uprooting fundamentalism and extremism from the region.

3. Iran has to implement all UN Security Council resolutions on the nuclear issue, should respond to all IAEA questions, and allow intrusive inspections from all military or non-military site whether declared or not.

4. Liberty residents’ protection should be provided and guaranteed by Iraq, the United States, and the United Nations; part of the personal weapons of the residents should be returned to them for their protection against the militias, and Camp Liberty should be recognized as a refugee camp and the medical blockade on the camp needs to be completely removed.

5. We stand with the Iranian people and the 10-point plan of Mrs. Maryam Rajavi, President of the National Council of Resistance of Iran (NCRI), that advocates a democratic non-nuclear Iran based on the separation of mosque and the state, respect for individual rights and freedoms, gender equality, and peaceful coexistence.