Maryam Rajavi: Iran regime “cannot and should not be trusted” 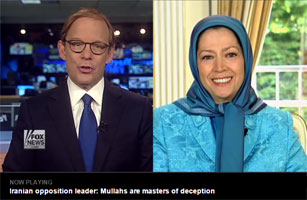 In an interview with Fox News the President-elect of the National Council of Resistance of Iran said the current regime in Iran ‘cannot and should not be trusted’ and is calling on the U.S. and world powers to recognize Tehran’s intentions in advance of a deadline on the interim nuclear framework agreement.

"Nuclear negotiations should compel the Mullahs' regime to abandon its nuclear weapons program. This is the desire of the Iranian people who oppose this program. The Mullahs need the bomb for their own survival," warns Maryam Rajavi.

"No concession should be made to this brutal regime."

"Do not make more concessions to this regime. Adopt a firm policy and make it clear to the Mullahs ruling Iran that they have to abandon their nuclear weapons program," she told Fox News in an exclusive interview, in which she issued a stark prediction as the talks continue.

Mrs. Rajavi warns that "making more concessions to the regime lays the ground for more instability, and more conflicts and war. U.S. policy has embolden the Mullahs' regime. I warn them that their illusion of changing the behavior of the Mullahs' regime by making concessions to it has already cost the Iranian people dearly, continuing on that path would have serious consequences for the region and the world."

Mrs. Rajavi told Fox News that the West trying to find a "moderate" in the government is an "illusion," and she branded Tehran "the epicenter of extremism and Islamic fundamentalism" that covets a nuclear ability.

Maryam Rajavi made the remarks to FoxNews a day before the largest gathering of Iranian opposition which will be held in Villepinte, north of Paris.

Fox News report said: “A litany of top former government officials from the United States and other western nations are set to address the gathering in France, including former New York City Mayor Rudolph Giuliani.”