Conference Held in Support of 'Justice Seeking Movement' in Berlin 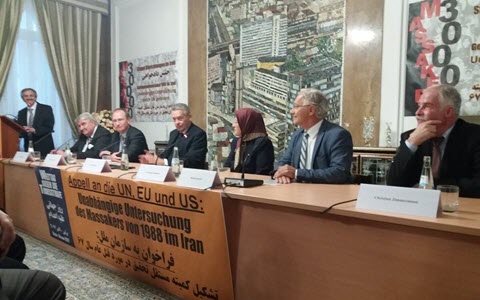 NCRI - A conference was held at the Office of the National Council of Resistance of Iran (NCRI) in Berlin to support the Justice seeking movement for the Massacre of 1988. Some representatives of the German Federal Assembly, political figures, prominent layers, human rights activists and the representatives of Iranians living in Germany participated at the conference.

The speakers at the conference condemned the increasing executions in Iran and called on the German government to have relations with the Iran regime under the condition of halting executions. The speakers also stressed on the need to carry out an international investigation on the massacre of 1988 so that the extent of this crime is clarified and the perpetrators are tried.

A number of political prisoners, witnesses, and the families of the martyrs testified to the regime's crimes during the massacre of 1988. The head of the solidarity committee for Free Iran and the member of the board of directors at Konrad Foundation, Otto Bernhardt at the conference stated, "We do not have to forget that 30000 political prisoners were executed in different prisons in Iran in 1988. Our primary goal is to bring the injustice and violation of human rights to the International Court of Justice."

The German MP from the ruling Christian-Democrat Party, Martin Patzelt also referred to the upcoming UN meetings on the human rights situation, calling for attention to the human rights situation in Iran, especially the massacre of 1988. Martin Patzelt also stated at the conference, "The political prisoners, who were executed in 1988, were only a group of people who wanted to establish a new Iran. They only supported the People's Mujahedin of Iran (PMOI)."

The former member of Christian-Democratic Fraction in the German Federal Assembly, Leo Dautzenberg stated at the conference, "What has occurred in the past and the executions carried out by the Iran regime are awful. The execution of political activists is an instrument to fail the attempts of the Iranians to realize the freedom."

The German MP from the ruling Christian-Democratic party, Kalus-Dieter Fritsche condemned the appeasement policy of Western governments towards the Iran regime, disregarding the human rights violations, and daily executions in Iran. He also emphasized the appalling crimes and repressive measures of the Iran regime.

The prominent lawyer, Bernhard Heusler, in his speech referred to the massacre of 1988 and the advancement of the litigation movement in Iran. He stated, "The truth about Iran's injustice will not fail. Not only should the main perpetrators of the massacre of 1988 be brought to justice, but also those behind the curtain and those who had 16 members of death commissions throughout the world.

The head of the Berlin Human Rights Office, Christian Zimmermann has been investigating the measures of the international assemblies, including the Nuremberg court, the Yugoslav court of special tribunal to eliminate the impunity of defendants. He stated that these measures show that a global community can prosecute the perpetrators and defendants. Therefore, it is not acceptable that nothing is done regarding the massacre of 1988.

The representative of the NCRI in Germany, Dr. Masoumeh Bolurchi referred to the continuation and increase of repressions, the daily arrest of peace-seeking people, and the surge of executions in different cities of Iran. She called for supporting the litigation movement predicting that Iran will have golden days in the future.