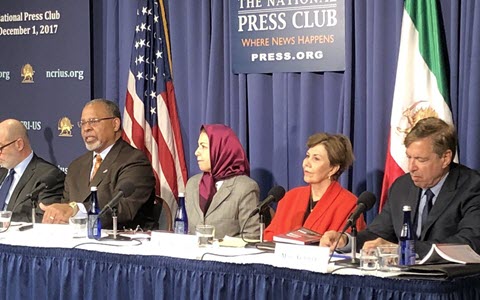 NCRI - A panel of policy experts met on Friday to discuss the dismal condition on human rights under the Iranian Regime and concluded that the international community needs to hold Iran accountable for past and ongoing abuses; specifically the 1988 massacre of 30,000 political prisoners, in which senior members of the Regime (including many still serving in President Hassan Rouhani’s cabinet) were heavily involved.

J. Kenneth Blackwell, the former U.S. ambassador to the United Nations Human Rights Commission, said during the panel that he is working with the US delegation to the UN, including Ambassador Nikki Haley, to expose the Regime crimes. In October, he wrote to her suggesting that she mention the 1988 massacre to demand action on the Iranian Regime in this year’s UN resolution. Unfortunately the UN was reluctant to add it, lest it risk the overall success of the resolution which includes the nuclear deal.

Blackwell said: “So even within the context of human rights, there is this reluctance to pinpoint and shine a light on that atrocity which would give deep insight into the character of the regime. And so when I hear this juxtaposition that we have to worry about speaking out against human rights violations because it might, in fact, affect our negotiations on the nuclear issue, I basically say well who is it that the nuclear threat threatens? The most precious human right, the right to life. [I] think it’s a false separation. And so in my argument, I basically say we need to know who our partners are that are afraid to let us have access to the 1988 massacre remains, and two, why do we have this false construction of either or? It is a situation where it is both.”

Soona Samsami, the US Representative of NCRI and an activist for gender equality, said that the time had come for an international investigation into the massacre.
She said: “Members of the Iranian regime have acknowledged both the massacre occurred and admitted their role, with pride, in the summer of blood, paving the way for a UN response.”

However, Haley noted that the US delegation is currently advocating for action on enforced disappearances and arbitrary detention in Iran. The Iranian Regime has a well documented and longstanding policy of denial of due process, show trials, and systematic torture.

This discussion, held at the National Press Club, coincided with the US Congress’s review of Iran policy options and the release of a book published by the Iranian resistance group, the National Council of Resistance of Iran (NCRI), titled Iran: Where Mass Murderers Rule and Massacre of 30,000 Political Prisoners and the Continuing Atrocities.

Linda Chavez, former Director of the White House Office of Public Liaison and an independent US expert to the Subcommission on the Prevention of Discrimination and Protection of Minorities, praised the book’s publication, saying that it presented very detailed information about the 1988 massacre in a brand new way.

She said: “There were thousands, tens of thousands of people who were subjected to extrajudicial killings. They were put to death, often in public settings … hung from cranes, and hung on Friday in the public square so that it would send a message of terror, really, to the Iranian people. But until recently those reports were not substantiated by hard evidence, and they certainly were not admitted to by those in the Iranian government.”

The victims were buried in secret mass graves, which are being constantly obstructed by the Regime.

Marc Ginsberg, former US ambassador to Morocco and Deputy Senior Adviser to the President of the United States for Middle East Policy, said that the 2016 Human Rights Report issued by the State Department was whitewashed.

He said: “If I had been an ambassador in Iran, and had been asked to report—to write this report, there is no way that I would have permitted this report to have been issued by the State Department under the Obama administration. It represents what essentially is a lack of condemnation of human rights violations across the board, while it details in some respects many of the atrocities.”

Chavez also reported that things have not changed for women in Iran, noting that women are not even considered second-class citizens in Iran.

She said: “We have a society in Iran in which it would be an understatement to say half of the population are regarded as second-class citizens…Women in Iran continue to be subject to gross human rights violations. They are not treated as equals under this system. And I think one of the most interesting things that we’re seeing, and you can see it even in the pictures in terms of what’s happening today, is that there is a rebellion by the Iranian people.”

Also speaking at the panel discussion was Adam Ereli, former US Ambassador to Bahrain and former Deputy Spokesperson for the United States Department of State.