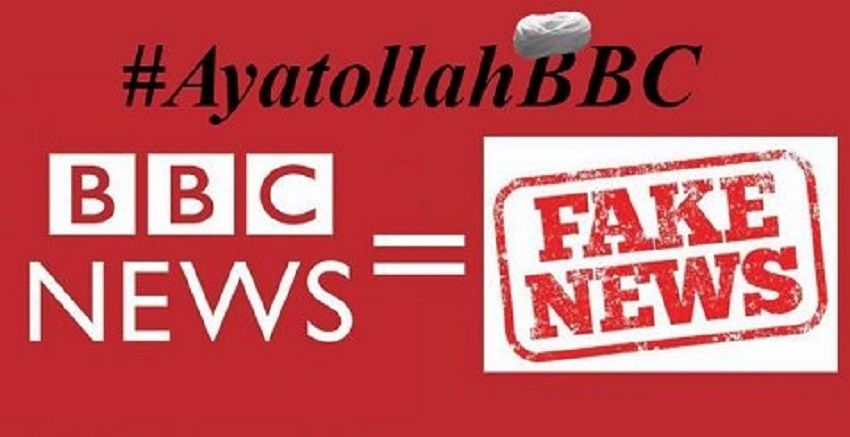 The poster widely used over the Internet, during the Iranian people's Twitter campaign against the Iranian regime's demonization program aired on BBC Farsi

The Iranian diaspora is expressing anger at the BBC on social media over its biased reporting in favor of Iran’s regime, bashing the principal opposition organization, the People’s Mojahedin Organization of Iran (PMOI), otherwise known as the Mujahedin-e-Khalq (MEK).

The hashtag #AyatollahBBC seems to be trending on Twitter, with more than 20,000 tweets registered during a two-hour period on Wednesday night alone.

Want to get a sense of how the Iranians feel about the Fake News BBC? Just take a look at #ayatollahBBC on twitter for the past hour. Very telling.
Facts are facts and don't care about your feelings, @BBCWorld , @bbcpersian pic.twitter.com/hcZgVdxDTo

Twitter monitoring records show that tweets with the hashtag have been displayed more than 20 million times for Twitter users.

The BBC’s biased reporting came to a peak on November 11 with a program on BBC Persian TV giving air-time to known agents of the regime’s Ministry of Intelligence and Security (MOIS) to demonize the democratic Iranian opposition, the MEK.

The MOIS agents repeated the mullahs’ lies against MEK members residing in their base ‘Ashraf 3,’ in Albania.

On November 7, 2019, the BBC World Service broadcast a report on the MEK, replete with stale and threadbare allegations.

The NCRI’s Security and Counter-Terrorism Committee responded to the report in a statement on the same day, clarifying and highlighting the frantic efforts of the religious dictatorship ruling Iran against the MEK cloaked under the disgraced banner of "former MEK members."

#ayatollahbbc Hitler's propaganda minister Joseph Goebbels: "Tell a lie that's big enough, and repeat it often enough, and the whole world will believe it." With its latest drivel against the PMOI/MEK, the BBC has take a page right of Goebbels' note book. pic.twitter.com/rvlfq9EKM5

Four days later, on November 11, the English and Persian websites of the BBC posted a new version of that report, conveniently edited for consumption by the regime's media outlets and its Friday prayers leaders. The BBC’s accommodation of the Iranian regime’s propaganda machine clearly showed the lengths to which the outlet had chosen to go to serve the mullahs’ regime, even as the religious tyranny is faltering under the weight of Iranian people’s resistance, regional developments, and increasing international isolation.

Iranians are truly talented! looking at some of the pictures in cartoons in the #ayatollahBBC hashtag! truly representing @BBCPersian in full color!
tonight's favorites: pic.twitter.com/U2tcZ9aPte

What Explains Latest BBC's Anti-MEK Tirade in the Service of the Mullahs – November 11, 2019