There’s an alternate solution to the nuclear and terror threat the Iranian regime poses in the Middle East – and that’s for the United States to support the existing Resistance movement against the regime inside Iran, retired U.S. General Hugh Shelton, the former Chairman of the Joint Chiefs of Staff, tells Newsmax TV.

In an interview with “The Hard Line” host Ed Berliner on Monday, Gen. Shelton, who served from 1997 to 2001 as Joint Chiefs of Staff chairman and is author of “Without Hesitation: The Odyssey of an American Warrior,” says Washington has “got to support” the National Council of Resistance of Iran (NCRI) “if we want them to be able to move forward.” 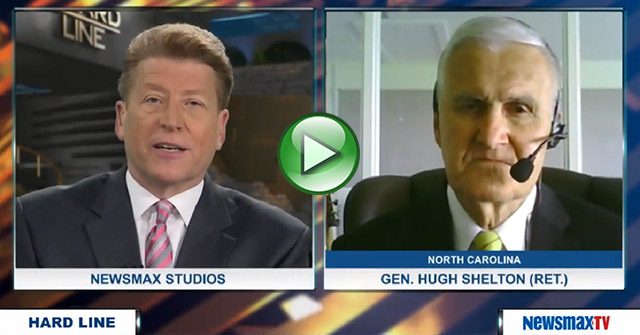 According to Newsmax.com, Gen. Shelton praised the NCRI’s program “that looks like our Declaration of Independence.”

“It has all the rights, all the freedoms expressed for the Iranian people that you and I as Americans would like to see,” he said. “Giving them a chance by supporting them in a way that will allow them to empower the people inside of Iran and lead to an uprising … scares the daylights out of the mullahs and the ayatollahs inside of Iran.”

“It’s awfully tough to speak out against a regime who has all the arms and who is constantly throwing those in jail that speak out against it,” he said. “You only get a half truth when you talk about what’s coming out of the Iranians, at best.”

Gen. Shelton also expressed frustration that President Barack Obama is not listening to the opponents of the deal in the United States, “one of the most bipartisan groups that you probably ever find inside of the Beltway.”

“It’s got everyone from former presidential candidate and head of the Democratic National Committee Howard Dean, to [former Pennsylvania Democratic] Gov. Ed Rendell, [former Pennsylvania Republican] Gov. Tom Ridge, who is also the first homeland security director, and then it’s the attorney general director, the FBI, two CIA chiefs … saying ‘Look Mr. President, we know you don’t want to go to war with Iran. We understand that. We know you don’t really want a nuclear empowered Iran, but there is another alternative. Listen to what we’re saying.’”