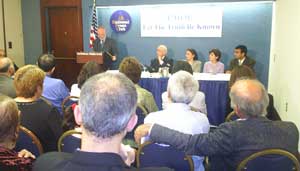 Washington DC
In a press briefing at the National Press Club on May 26, attorneys for Camp Ashraf residents, their relatives and some former PMOI activists who now live in the West refuted the allegations against the PMOI in Human Rights Watch’s report.
Professor Steven Schneebaum and Ronald Precup rejected the HRW report on the PMOI, calling it "procedurally flawed and substantively incorrect." Mr. Schneebaum, who visited Ashraf in January 2004, called it Ashraf City, because it was no longer a military encampment. He concluded that "Human Rights Watch has made a mistake in this case." Among other reasons that he cited is that Ashraf residents, having been thoroughly investigated by agencies of the United States Government, have been recognized by the U.S. Government as "protected persons" under the Fourth Geneva Convention. This determination alone would seem to undermine the entire basis of the Human Rights Watch allegations against the PMOI members who live in Ashraf.
Mr. Precup, U.S. counsel for the PMOI said, “Flawed procedures have produced false facts against the PMOI. Twelve hours of telephone interviews with 12 individuals are simply insufficient to produce a properly substantiated report. Mohammad-Hossein Sobhani, a key "witness" in the HRW report, was a team-leader and veteran agent of Iranian intelligence. In fact, most of those interviewed by Human Rights Watch were sent from Iran to Europe for the purpose of demonizing the PMOI."
In addition, several relatives of Ashraf residents called upon Human Rights Watch to seek the truth and "not to serve Tehran’s political campaign against its opposition." Former residents of Ashraf spoke as witnesses, presenting a letter signed by nearly 500 former residents calling on Kenneth Roth, Executive Director of HRW, to "retract the flawed report."