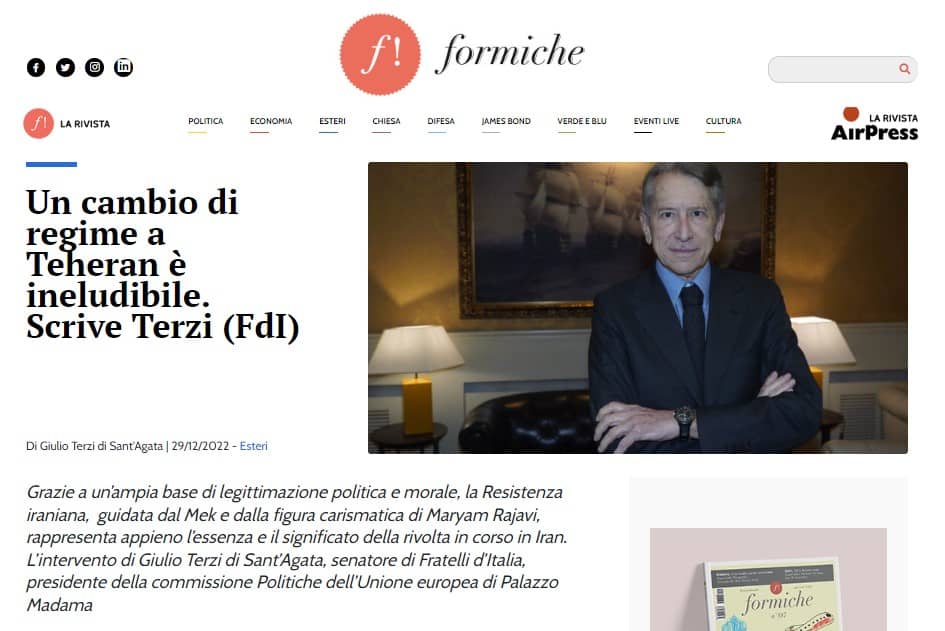 In the course of the nationwide uprising in Iran, despite the fluctuating trend of gathering crowds that come of different sizes and various locations, the movement has continued its demonstration for more than 107 days. Sometimes in bright daylight, at times in the safety of the night, whenever they find a reason to congregate, Iranians, young and old, rally and call for the death of the dictator.

The perseverance of what many call a “revolution in the making” has attracted an international choir of support. Many world leaders, legislators, NGOs, and activists have condemned the brutal crackdown of Iranians, and the media in many countries cared to adopt a new tone.

Yet most of them still tend to view the things that appear on the surface, and they fail to recognize the underlying motives and driving forces. Neglecting to understand how strong cultures are preserved, they don’t see how a nation that has been bombed with devout extremism for more than four decades still honors its martyrs and rejects religious fascism.

Yet there are exceptions. There are those who can distinguish between temperamental opportunism and decent commitment.

One of these exceptions is former Italian Minister of Foreign Affairs, Mr. Giulio Terzi. Having held various positions in his almost 50-year-long journey in public service, he traveled across the globe to represent his own nation, met hundreds of peers, and shook hands with dozens of prominent world leaders, and crafted strong bonds.

On December 29, in an article in the Italian website Fermiche, Mr. Giulio Terzi, now a Senator from the Fratelli d’Italia Party (FDI), explained why he has been supporting the National Council of Resistance of Iran (NCRI) and its President-elect Mrs. Maryam Rajavi for more than a decade.

Thanks to a broad base of political and moral legitimacy, the Iranian Resistance, led by the MEK and the charismatic figure of Maryam Rajavi, fully represents the essence and meaning of the ongoing uprising in Iran, Mr. Terzi wrote.

Highlighting how a true Islamic movement like the Mujahedin-e-Khalq (MEK) played an instrumental role in exposing the true nature of the regime and its atrocities, Mr. Terzi stressed that although repeated, still vain, attempts to discredit or reduce the real extent of the events taking place throughout Iran and to separate their origins from the past, the reality of the facts – the massive political campaign conducted by the MEK and its allies against the mullahs – the true nature of the regime, manifested ever since Ayatollah Ruhollah Khomeini had devised his dogmatic system of power, known as “Velāyat-e Faqih,” is now vividly exposed.

Over the past forty years, the National Council of Resistance of Iran has waged a relentless campaign, inside and outside Iran, to expose the terrorist activities of the regime, and has become, therefore, a viable and democratic alternative to the mullahs. It seems most appropriate that the international community actively support the president-elect of the Iranian National Council of Resistance, Mariam Rajavi, and her allied groups in the long march towards freedom and democracy: for an extraordinary country, Iran, where freedom and democracy must shine again, he asserted.

In his column, Senator Terzi also carefully reflects on the 10-point plan of Mrs. Rajavi that aims to lead the NCRI through the interim process following the regime’s fall. Though temporary, these principles have been unanimously adopted by all NCRI members and constitute a road map toward the drafting of a new constitution for a free and democratic Iran.

Strongly objecting to the failing approach of the West and highlighting its grave consequences, Mr. Terzi added that many Western governments have pursued illusory appeasement policies for too many years, moreover ignoring the crucial contribution of the Iranian people and MEK’s opposition to the regime. It is very clear that the Iranian regime can never be reformed. The urgency is therefore being affirmed to prevent Tehran from continuing to massacre and torture its people, to destabilize entire regions of fundamental importance for Europe, to increasingly tighten its involvement in Russia’s war of aggression against Ukraine, to threaten directly and through its proxies, Hezbollah and Hamas, the very existence of Israel, even equipping itself with the atomic weapon, which it could rapidly acquire.

The theocratic regime’s establishment can no longer hide or downplay the scale of the uprisings across Iran. Thanks to a broad base of political and moral legitimacy, the Iranian Resistance – led by the MEK and the charismatic figure of Maryam Rajavi – fully represents the essence and meaning of the ongoing revolt in Iran for a regime change that has become unavoidable, the former Italian FM concludes.

In an interview with the Italian Radio Radicale which was aired and later published on December 27, Senator Terzi said that in 1988, before becoming president, he [Ebrahim Raisi] was the leading judge of what was called the death commission, a commission that had to implement, and which he, unfortunately, implemented in the full extreme, the cruel will of Ayatollah Khomeini for the hanging of thirty thousand political prisoners. These were overwhelmingly political prisoners of the People’s Mujahideen Organization, the worst enemies of the regime. The People’s Mujahideen is a very large organization and very rooted and that’s why the regime is scared today.

Explaining the disinformation that is fed by the Iranian embassy in Rome, Mr. Terzi said the Iranian regime officials are the masters of propaganda. In recent weeks, we are seeing a phenomenon, where some people fall into confusion, even among people who weren’t confused before. People who until recently knew perfectly well that the Mullahs behave like criminals and that the victims, i.e. the Iranian Resistance, are the real ones headed by Madame Rajavi. Let’s remember that the Iranian Resistance is the one that made the world discover the existence of a clandestine nuclear military program in 2003. Without the People’s Mujaheddin, Iran would already have its fingers on the button. This happened because the MEK is so rooted in the system as well as in civil society.

Therefore, the Mujaheddin are not only an attractive force in popular uprisings because of course it is thanks to them that the people have the courage to finally rebel. They have been rebelling for three years.

Despite this, we have people who confused the good with the bad. They mistook the aggressor, the executioner, and the butcher for the victim and those who are suffering. It is very clear that there is the theocratic regime on one side, and on the other side there are the people. I only hope that it’s to their naivety that some people fall prey [to misinformation].

Referring to the funeral of former PM Franco Frattini and the attendance of the NCRI’s delegation, Senator Terzi explained Franco Frattini had always been close to them for twenty years. He even had the courage to be close to the Iranian Resistance as foreign minister. And if there is a person who was well informed about the [regime’s] interlocutors, it was him. He had very serious relationships and was very attentive in evaluating real things. He was a man with a great experience in intelligence. Therefore, because of the tasks that he had held, he knew who he was dealing with.

Many thanks Madame President for your brave struggle for democracy and hunan rights in Iran!

Senator Giulio Terzi di Sant’Agata has served the Italian diplomatic service since 1973. He has been the first secretary for political affairs at the Italian embassy in Paris, Italy’s Economic and Commercial Counsellor in Canada, a political advisor to the Italian Mission at NATO, an ambassador of Italy to Israel, and Italy’s permanent representative to the United Nations in New York in 2009 he led the Italian delegation to the UN Security Council. Mr. Terzi also served as the Italian Ambassador to the United States in Washington DC and on November 16, 2011, he was appointed Minister of Foreign Affairs by Prime Minister Mario Monti.

During his tenure, he held 1,483 meetings and events, which covered 91 different countries with 75 official visits abroad and 138 meetings with other foreign ministers, of which 63 were in Italy, and 75 were overseas.