Text of speech by the Right Reverend John Pritchard 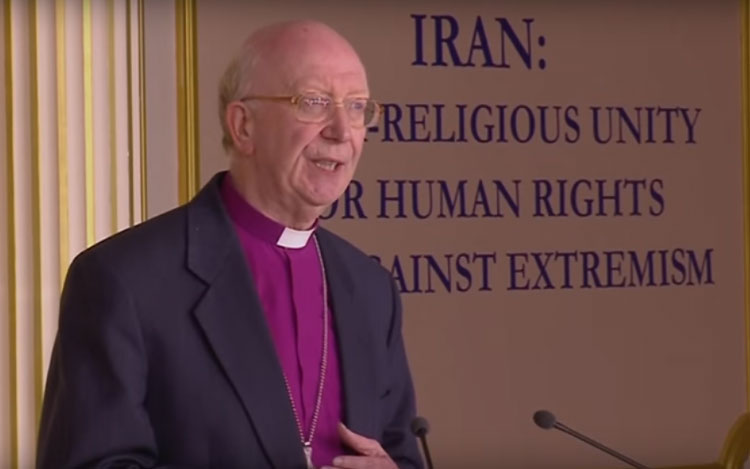 The Right Reverend John Pritchard, former Bishop of Oxford, made a speech in Auvers-sur-Oise, north of Paris on Wednesday January 20, 2016.

He along with the Right Reverend Adrian Newman, the Bishop of Stepney, met with Mrs. Maryam Rajavi, President-elect of the National Council of Resistance of Iran (NCRI) at her residence.

Below is the text of speech by The Right Reverend John Pritchard:

I first became involved in the issues that are on your heart and on ours six or seven years ago. It was 2009 and it was after one of those dreadful attacks on Camp Ashraf that had done so much damage and I was told of the hunger strike that was going on in Grosvenor Square in London where outside the American embassy.

And it seemed to me astonishing that these good, gentle people should have been driven to such an extreme form of self-denial and danger and pain because of what was happening in Iraq. And I was very moved by what I saw and what I then began to learn and I was fortunately in a position to be able to involve the Archbishop of Canterbury, who at that time was Rowan Williams, and he too got very committed to this cause that we all hold dear. His public statements I gather were really quite significant.

And so began a journey for me of trying to understand what it was that your brothers and sisters and you were going through. And as a member of the House of Lords, as I was, I continued to the write to ministers to sign letters and petitions to be to be part of the parliamentary campaign on behalf of what was now Camp Liberty and all that was going on there.

So I’ve been involved in only a very small way for six or seven years and I really don’t deserve the quality of your welcome.

Madam Rajavi, I mean that very specially. I am grateful for an overwhelming welcome which I really don’t think I deserve.

But behind Camp Liberty, of course, is the bigger issue of Iranian influence in Iraq.

Why have there been seven rocket attacks on Camp Ashraf, Camp Liberty, claiming so many lives? Why are the refugees denied protection, although it’s been agreed with the UNHCR?

Why are the refugees not allowed even to rebuild or clear up the mess from the latest attack just so recently? Who are the militia? The militias who orchestrate and undertake these attacks. And who are they accountable to?

Well, the dark shadow of Iran is obviously over all of this. Iran seems to be a regime where human rights are appallingly neglected. Where 2,000 people have been executed in the time of Hassan Rouhani. Where more juveniles are executed that in any other part of the world. Where it isn’t safe to belong to a religious minority or to be a journalist or to be an activist or the family of anyone who’s a political prisoner. Or indeed to express any opposition. Why is this the case? And now we have Iran being welcomed back into the international fold because of its promises on nuclear weapons.

As a citizen of the United Kingdom it seems to be essential that we don’t get any closer to Iran unless there is a halt to these dreadful executions and the torture and the acid attacks on women and girls, and the cutting off of hands and feet and the imprisonment of political opponents and Christian minorities and so on – a dreadful catalogue.

I appeal to the British government to be more resolute in the way that we talk to the government of Iran now. Or, what does morality mean? Human rights are universal, they are indivisible and they are interdependent. You can’t take them apart.

Martin Luther King, the great civil rights activist in the United States, said: “Injustice anywhere is a threat to justice everywhere. Whatever affects one directly, affects all indirectly.” In other words, human rights are indivisible. The United Kingdom and the international community have to live up to the November / December resolutions in the in the general assembly of United Nations which roundly condemned Iran’s flagrant and systematic violations of human rights and demanded an end to all of that. It is very good that debate occurred and drew international attention to what you have fought for, for so long.

I’ve read Madam Rajavi’s ten points for the basis of a democratic, non-nuclear Iran with universal suffrage. Those ten points with the rule of law, an independent judiciary, gender equality, the elimination of all forms of discrimination. How can that not be right? Of course it is and the British government ought to be applying strong pressure for that to be the case and not just rolling over because of the nuclear deal.

And in the meantime, what about the poor residents, the refugees in Camp Liberty, fearing another attack, as these very suspicious, so-called family members, are scouting out the territory? And real family members are being so persecuted and harassed and arrested in Iran itself. Some things at least need to be done by the British government with the United States and European cooperation.

Firstly, the UNHCR must declare Camp Liberty to be a refugee camp, properly, under the auspices of the United Nations and the residents as political refugees.

Secondly, the government of Iraq must dismiss, from the committee in charge of camp security, anyone with known ties to Iran, to the regime there.

Thirdly, a delegation of European, American and Arab lawyers and parliamentarians must be allowed to go to Camp Liberty and make their own independent report.

Fourthly, United Nations Security Council must carry out an independent investigation into those seven attacks and bring the perpetrators to justice.