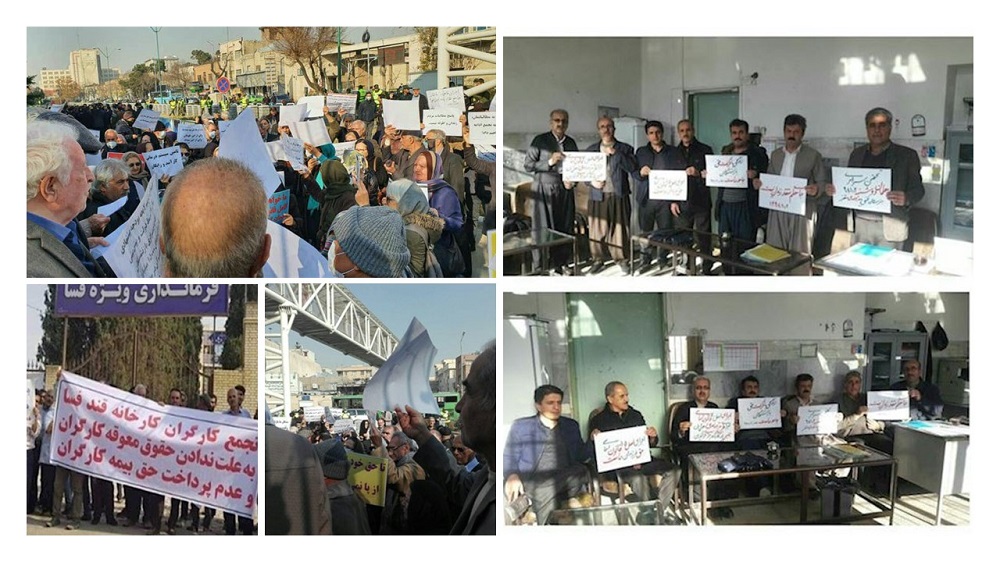 On Monday, December 23, a large number of retirees staged a protest gathering in front of the regime’s Majlis (parliament) building in Tehran. Protesters carried placards, some of which read: “The answer to people’s demand is not prison and bullets” and “We will not rest until we obtain our rights.” They also carried pictures of some of the martyrs of the November nationwide uprising.

On the same day, in solidarity with the protest gathering of retirees, a large number of teachers protested in various cities, including Mashhad, Shiraz, Sanandaj, Safashahr (in Fars Province), Marivan and Saqqez. Some of the teachers carried placards that read “Imprisoned teachers must be released” and “Teachers don’t belong in prison.”

December 23 – Tehran, #Iran
Retirees from across the country rallying outside the regime’s Majlis (parliament) and holding a protest gathering coinciding with a nationwide strike by teachers.#IranProtests pic.twitter.com/ZeY6VPfACl

In Arak, employees at HEPCO company protested against the delay in the payment of their wages and the regime-affiliated employer’s obstruction in determining shares and execution of resolutions regarding this company.

In Karaj, railway workers protested against delays in the payment of their wages and benefits.

In Ramhormoz (Khuzestan Province), water and wastewater employees continued a strike for a second consecutive day and protested against delays in the payment of their wages.

In Shahr-e Kord (Chaharmahal and Bakhtiari Province), workers at the cement factory, whose main shareholder is the regime’s Maskan Foundation, staged a gathering across the factory in protest to disregarding their demands as well as difficult working conditions.

December 23 – #Iran
Teachers across the country are launching a nationwide strike. Initial reports from the cities of Bushehr, Saqqez and Marivan.#IranProtests pic.twitter.com/ScK9lNxgDB

Workers at the Hatami Contractor based at the Chadormalu Industrial Company in Yazd Province also went on strike and staged a gathering on Saturday, December 21. The gathering was in protest to the lack of execution of the plan to classify their occupations.