Iran runs risk of sanctions if it remains silent: Merkel 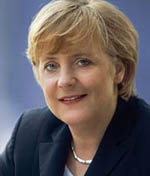 Agence France Presse – German Chancellor Angela Merkel warned here on Thursday that Iran could face sanctions if it continued to respond to international proposals on its nuclear programme with silence.

"We have waited patiently and we have had no workable response from Iran. We have to see what the next steps will be if Iran continues to remain silent.

"This may include sanctions," Merkel said at a press conference with US President George W. Bush, who is visiting the German leader before they go to Russia for the G8 summit.

Merkel said the international community would remain firmly united in trying to ensure that the Islamic republic "does not develop nuclear weapons while ensuring that the rights of its people are respected".

"If Iran thinks that the international community will be divided, then it will be disappointed," she added.

Iran has been offered trade, diplomatic and technology incentives as well as multilateral talks — involving the United States — if it agrees to a suspension of sensitive nuclear activities.

But world powers, impatient over the lack of a definitive response, on Wednesday referred the crisis back to the UN Security Council, which can impose sanctions on Tehran.

Iranian President Mahmoud Ahmadinejad on Thursday responded by threatening to halt UN inspections and quit the nuclear Non-Proliferation Treaty if Tehran is put under more pressure over its nuclear programme.