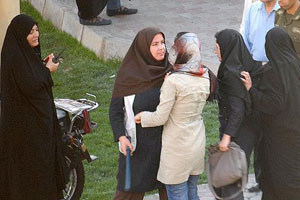 NCRI – The Iranian regime’s strict women’s dress code has become a source of friction between the people and the regime, the commander of Morality Police has admitted.

He told a group of clerics at a seminar on ‘the Hejab and chastity’ in the city of Qom on Sunday (January 19): “Improper dressing and avoiding wearing the veil is one of the oldest issues in Islamic society and for police today this issue is a point of friction between the rulers and the body of the society.

“And many of those avoid the dress code have themselves grown up in religious families. This issue of improper veiling has turned to a security issue that is threatening our society.”

“The Hawza (the seminaries), Seda and Sima (the official radio and television network) and the State Security Forces (police) must do their utmost to make address the Hejab (the regime’s dress code) as an important social issue.

“Mixed gender parties where the Hejab is not worn are on the increase in Tehran, and this is a source of serious concern.”

Imported satellite TV equipment was also a threat to the country’s chastity, he said.

Colonel Zahedian added: “The anti-social function of the social networks in the country is another threat to chastity because it creates behavioral changes that will lead to changes in thinking, and create a structural change in the Islamic system that threatens chastity.

“The majority of those we confront regarding being improperly veiled and dressed are born in the 1980s… What has gone wrong?”

He also told the seminar that his forces had identified and arrested 30 underground fashion shows and arrested all those involved.

In the seminar, Cleric Mohammad Reza Zaibai-Nejad, the director of a center for research on family issues, said: “If you ask the police what people’s reaction is to being told they are improperly veiled, they protest. This indicates that what we are doing is not working.”

“If we counter public opinion with harsh methods and stand against the whole of society, nothing will be achieved.

“If they do not achieve their goal in the cultural arena, it will outbreak in the political field.”

He also warned: “If we lower the measures that have been taken, society will become more emboldened and corruption will expand, and if we become too harsh society will collapse.”

“The widespread rejection of compulsive veiling in Iran is a collective statement against the regime,” representative of the National Council of Resistance of Iran (NCRI) has stated.

Mrs Soona Samsami wrote in article in The Hill: “The mullahs have turned the voluntary dress code in Islam into a very strict rule. As a consequence, a clear way of expressing opposition against the theocracy, even for Muslim women, has been to defy their misogynist rules.”

“Compulsory veiling and the systematic suppression of women by the Iranian regime shows that they politicized Islamic fundamentalism and extremism in the region long before the Islamic State (ISIS).”

The remarks by the regime officials admitting to their failure exposes “the face of a weak and desperate theocracy unable to curb increasing social opposition to its rule – led by women.”