Iran’s Involvement in Syria Is Creating A “New Holocaust” 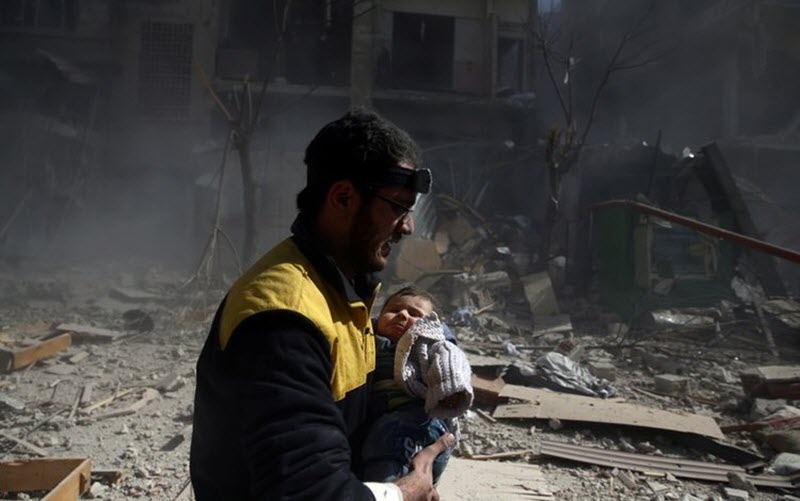 NCRI – A high-ranking member of the Syrian opposition has said that the actions of the Bashar Assad Regime, along with its allies Iran and Russia are creating a new “Holocaust” in rebel-held areas of the capital Damascus.

On Tuesday, Mohammed Alloush of the Army of Islam told The Associated Press that the United Nations was also to blame for the tragedy “because of its bankruptcy and lies about protecting security and peace in the world”.

He made these comments after opposition activists and paramedics in the eastern suburbs of Damascus reported the deaths of at least 100 people on Monday.

That is the worst daily death toll in the area, also known as eastern Ghouta, in three years.

Alloush, whose rebel group is strongest in eastern Ghouta, said that Assad and his backers Russia and Iran were a “Satanic alliance” on a level that is “unprecedented since World War II.”

Alloush said: “A new Holocaust is being committed by the dirtiest regime on earth.”

The Iranian Regime has been present in Syria since the start of the civil war in 2011 and is very invested in the survival of the dictatorship as the Iranian mullahs fear that if Assad falls, then their Regime will be next.

The Iranian Regime also believes that if they help Assad win the war, then it will have two benefits. First, it will send a message to the democratic opposition forces in Iran about taking on the Regime. Second, it will put Assad in the Iranian Regime’s debt and lead to Syria becoming another Iranian vassal state in the Middle East.

As such, Iran has invested much money, weapons, and troops in the area, to the point where they are robbing the public purse and earning the ire of their citizens, who are calling for the Regime to end its regional aggression and focus on their citizens instead.

In order to bolster Assad’s forces, the Iranian Regime has been deploying Iran-backed Shiite militias there, including Hezbollah, the Afghan Fatimiyun Brigade, and the Pakistani Zaynabiyyun Brigades.

However, even while using their proxies, the Iranian Regime was unable to provide enough fighters for Assad, so they turned to using Afghan refugees (to whom they promised citizenship and a better life for their families) and even children (which constitutes a war crime under international law).

The Iranian Regime will never end its regional aggression and expansionism, and so the only answer for the freedom of the Iranian people and peace in the Middle East is regime change.

Previous articleIran: The Lives of Two Political Prisoners Are at Risk
Next articleIran: Demonstrations of Educators, Workers, Retirees and Looted People in Tehran and Across the Country