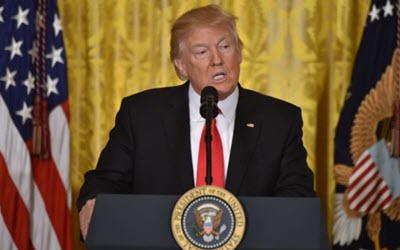 As the General Michael Flynn’s political star sets amidst continued controversy, the Trump administration is facing its first foreign policy tests less than a month after the inauguration.

Unsurprisingly, the two actors who are actively testing President Trump’s resolve come straight from George W. Bush’s “axis of evil”: Iran and North Korea, two of America’s most implacable adversaries. Ariel Cohen wrote in THE HILL on February 19, the following are excerpts of this article.

What is more intriguing is whether the two are coordinating their ballistic missile tests – and how much support they are receiving from their “sugar daddies” in Moscow and Beijing.

Clearly, the Trump administration will have to take steps to punish the Iranian Revolutionary Guards Corps (IRGC), an elite military-cum secret police organization, and the ruthless rulers of North Korea.
Future sanctions may involve not just the two terror-supporting states, but companies in Russia and China that are working to boost the missile efforts in both countries. Beyond that, the administration may consider broader deployment of missile defenses in the Middle East, South Korea, and Japan, and potentially, U.S. tactical nuclear weapons in vicinity of the two aggressors.

Sources in the Arab Gulf suggest that Tehran may be involved in testing its nuclear weapons and developing its ICBMs in North Korea. Since Trump’s election, the Islamic Republic has tested two medium range ballistic missiles, violating the spirit of the UN Security Council Resolution 2231, which codified the Obama administration-initiated Iran nuclear program compromise known as the Joint Comprehensive Plan of Action (JCPOA). Being derivatives of the Soviet SCUD-B missile and the North Korean No Dong, these weapons can become nuclear-capable.

It is also significant that the patrons of the two aggressor states were also tested: Russia by Iran, and China by North Korea. Both came to the aid of the provocateurs. Moscow announced that Iran did not violate the UN Security Council resolution. Beijing took matters one step further. Foreign Ministry spokesman Geng Shuang accused the U.S. and South Korea of responsibility for the missile tests.

As a reaction to the provocation from Teheran, Gen. Flynn put Iran “on notice”, while the Treasury Department imposed rather mild sanctions on 25 Iranian individuals and companies.

So, what can the Trump administration do? As it is being tested by bullies, the administration needs to show the perpetrators the limits of their disruptive behavior, and the U.S. allies need to be called to help. This means it is Washington’s turn, too, to test its allies. It also needs to reach out to Moscow and Beijing.

The Trump administration and U.S. allies also need to broaden their focus from Iran’s nuclear program to take in Teheran’s aggressive and disruptive behavior in the Middle East. Today, four Arab capitals: Baghdad, Damascus, Beirut and Sana’a, are effectively being controlled by Teheran. Moreover, Iran is a strategic ally of Russia in the Middle East, and it allows Russian bombers to use its air space for air strikes in Syria.

The Europeans need to limit their rush to trade with Iran by conditioning investment in the Iranian economy on cessation of the missile program and expanding JCPOA to permanently stop uranium enrichment.

The IRGC, which runs the missile testing and production, as well as the nuclear program, need all their numerous businesses sanctioned – inside and outside Iran. This should include IRGC leaders, their family members, and their businesses.

Any companies that do business with Iran’s military proxies, such as Lebanese and Iraqi Hezbollah, and the Houthi rebels, which threaten navigation off the coasts of Yemen and at the strategic Bab-el-Mandeb straits, should also be sanctioned.

Previous articleIran TV Host Admits to Tehran’s Attempts to Assassinate Regime Opponents Abroad
Next articleIran Regime’s MP: Our Detachment From People Is a Great Risk, We Need to Be Alert