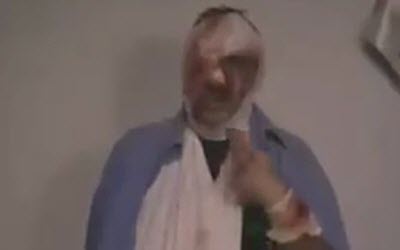 NCRI – According to reports on February 21, Revolutionary Guards in ‘Iran Khodro Company’ beat up a fed-up worker who protested against not being paid and poor working conditions, so that he was taken to hospital by his colleagues with broken nose and teeth.

He later released a clip in this regard, saying: “My fellow Iranians! I’m fed-up. Not for being beaten up, but for the humiliation at the hands of the regime which me and thousands of other workers have to suffer.”

“I decided to appear in front of camera in such a beaten state to show that how these scamps deal with someone who dares to speak out”, he added.

“I’m a worker. It’s quite some time I’ve been working in Iran Khodro Company. Sometimes I have to stay and work over the weekend and during holidays”, said the Iran Khodro worker.

“Ever since the Revolutionary Guards took charge of the factory, the situation for us poor workers has even worsened”, he added.

The Iran Khodro worker says that “the Revolutionary Guards are doing nothing at the factory but plundering and theft. They force workers work like slaves. Corruption is increasing every day. Sometimes we have to work non-stop for 24 hours.”

The toiling worker then explains why he was beaten by the Revolutionary Guards: “People have no idea what kind of vehicles are manufactured here. Some of my colleagues and I decided to let people know what’s going on here. But the result was that I was beaten to death by Revolutionary Guards agents in front of my wife and kids.”

He maintains at the end “I can’t remain silent. I’m tired of this life. We have nothing less than other countries. We should stand up and do something.”