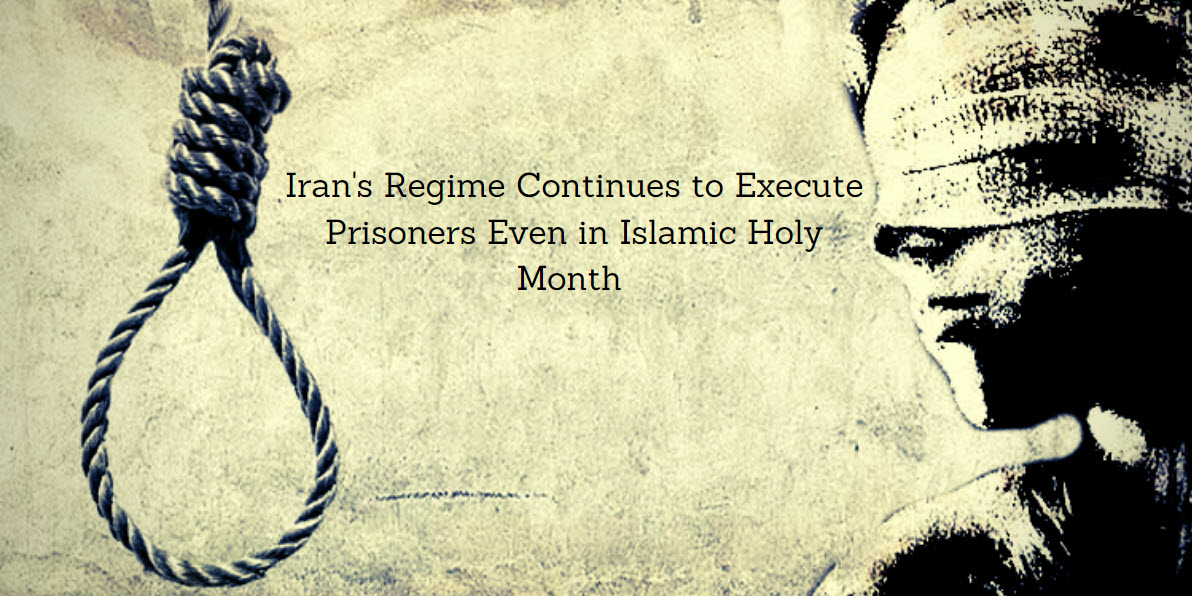 The Iranian regime continued to hand down and carry out execution sentences during the Islamic holy month of Ramadan, according to the latest monthly human rights report published by Iran Human Rights Monitor on Monday.

Islam advises against execution during the holy month of Ramadan but the Iranian authorities publicly hanged a prisoner in the fasting month, Iran HRM wrote in its monthly report for May 2019.

The report added, a political prisoner was sentenced to death on charges of “waging war on God”, “assembly and collusion,” and “membership in the MEK,” referring to the main democratic Iranian opposition group People’s Mojahedin Organization of Iran (PMOI or Mujahedin e Khalq, MEK). The verdict was issued by the branch 28 of Tehran’s Revolutionary Court presided by the notorious judge, Mohammad Moghiseh.

34-year-old Abdullah Ghasempour was arrested on May 21, 2018 for setting fire to a Revolutionary Guards (IRGC) Basij base, filming the event, and sending it to the MEK media.

Another three men, Mohammad Hossein Ghasempour (Abdullah’s brother), 32, Alireza Habibian, 30, and Akbar Dalir, 34, were sentenced to five and a half years each in prison for “assembly and collusion.” They currently being held in Ward 4 of Tehran’s Evin Prison. They were arrested along with Ghasempour, and are also affiliated with the opposition — the National Council of Resistance of Iran (NCRI), the coalition which includes the MEK.

The Iranian regime has a long history of using the death penalty as a tool to stifle discontent.

Last month the mullahs’ supreme leader Ali Khamenei appointed the fiery General Hossein Salami as the new commander of the Revolutionary Guards (IRGC). Earlier, he had appointed Ebrahim Raisi, involved in the massacre of 30,000 political prisoners in 1988, as chief justice.

The regime’s officials are alarmed at widespread public discontent turning into street protests, as Iran’s economy is in shambles: inflation has hit near 50 percent, its currency has almost collapsed, labor and civil servant strikes are commonplace and the regime faces a growing women’s rights movement.

In addition, recent nationwide floods have also left farming lands of 26 provinces in ruins and various diseases are threatening millions in the rural areas.

The regime’s shuffling of the country’s judiciary and armed forces signal that it is poised to ramp up pressure on public, to prevent any challenge to the mullahs’ rule.