Iran’s regime should be last to speak on Syrian stability: Saudi FM 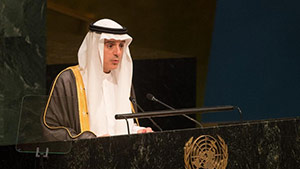 Saudi Arabia’s Foreign Minister Adel al-Jubeir has said the regime in “Iran is the last to talk” on establishing stability in Syria, according to an interview he gave to Al Arabiya News Channel at the sidelines at the United Nations in New York.

Jubeir’s comments came after remarks by the Iranian regime’s President Hassan Rowhani at the General Assembly.

The Iranian regime has been providing financial and military support to the Damascus regime as well as sending Revolutionary Guards to fight in Syria, where more than 240,000 people have died and four million people have been driven from their homes.

“Evidence has shown that Iran has militarily aided Yemen’s Houthi militias and is the main reason behind the conflict and civil war in Yemen,” Jubeir told al Arabiya News in response to Rouhani’s comments that Tehran was willing to contribute to a political solution in Yemen.

“Iran is trying to fan the flames in Yemen by smuggling weapons to Al Houthis in violation of UN Resolution 2216. Their last attempt was on Saturday, when an Iranian ship loaded with weapons destined for Al Houthis was intercepted. So, Iran is the last country to speak about stability and security in Yemen,” he said.
“Regarding the situation in Syria, if it were not for Iran, there would be no destruction, devastation and killing,” Jubeir said. “Iran supports the regime of Bashar Al Assad by sending thousands of Iranian militants to Syria and to the whole region and by recruiting the Hezbollah militia and other militias in the region and sending them to defend the regime of Bashar Al Assad.”