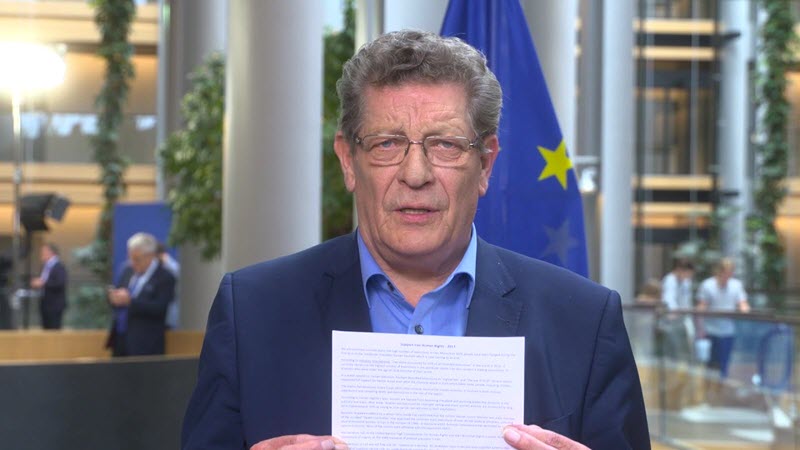 In a joint statement 150 Members of the European Parliament have condemned Iranian regime’s human rights abuses at home and its terrorist plots in Europe.

The signatories have expressed concerns for deteriorating situation of human rights and repression of women in Iran. The MEPs recalled that Iran “has maintained the highest number of executions in the world per capita during the presidency of the so-called ‘moderate’ Hassan Rouhani.”

Since late December last year, Iranian cities have been the scenes of major uprisings and anti-regime protests. The social atmosphere is volatile, and people demand fundamental change.

Meanwhile the regime’s officials have acknowledged the role of “resistance units” of the opposition PMOI (MEK) in organizing protests and nationwide strikes. Tehran spends millions on a massive smear campaign throughout the western world, disseminating false news and misinformation against this main opposition movement.

Unable to defeat the protesters at home, the regime launched a new wave of terrorism against opposition activists abroad. In recent months, several Iran regime’s terror plots have been neutralized by European and American Security agencies. An Iranian diplomat arrested in Germany is now facing trial in Belgium.

France has officially sanctioned Iran’s Ministry of Intelligence and accused it of being behind the bomb plot targeting the opposition NCRI’s Free Iran gathering in Paris on 30 June 2018.

The MEPs criticized the current EU approach towards Iran. “The EU’s silence in the face of brutal human rights violations in Iran and lack of any response to the serious terror plots in Europe is unacceptable,” the EU lawmakers emphasised adding that “we must hold the Iranian regime accountable for its terror plots and expel Iranian Intelligence Ministry operatives from Europe.”

They also urged Albanian government which is hosting several thousand Iranian opposition refugees “not to permit Iranian agents on its territory” after an Iranian bomb plot was foiled near Tirana earlier this year.

Speaking from Brussels MEP Gérard Deprez, chair of Friends of a Free Iran – an informal intergroup with a large following in the European Parliament, stressed: “Human rights in Iran cannot be compromised or marginalised on the excuse of political considerations, trade or the nuclear deal. Any expansion of political and economic relations with Iran must be conditional to a clear progress on human rights, women’s rights and a halt to executions.

Chair of Friends of a Free Iran in European Parliament