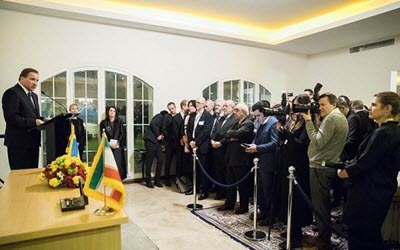 NCRI – According to terrorist Quds Force’s Tasnim news agency, several trade deals, including opening Iran-Sweden chamber of commerce, were signed during Swedish PM and his accompanying delegation’s visit to Tehran. The strange part of the story, however, is that the deals were signed in Swedish Ambassador’s residence in Tehran!

A number of senior government officials attended the ceremony, including Minister of Industry and Mining ‘Nematzadeh’, Minister of Energy ‘Chitsaz’, and Deputy Foreign Minister for European and American Affairs ‘Majid Takht-Ravanchi’. It’s not clear why the ceremony was held in Swedish Ambassador’s house, with no official news being released on the details of the deals or the ceremony.

Hossein Shariatmadari, Khamenei’s representative in Kayhan newspaper, has written in this regard: “our respected government officials should explain what made them accede to such humiliating measure? This raises the suspicion that as if some of our government officials planned to have whisper-in-the-ear or secret talks which they didn’t want other regime’s officials be aware of, thus to avoid any future explanation or responding! We hope that’s not the case!”

“It should also be pointed out in this regard, that the released photos of the ceremony show the women in the delegation accompanying Swedish PM were wearing no Hijab in the ceremony”, added Shariatmadari.

Swedish PM Stefan Lofven arrived in Tehran Friday February 10 at the top of a diplomatic and economic delegation. He met yesterday with a number of Iranian regime’s officials, including Khamenei and Hassan Rouhani. Five memorandum of cooperation was signed on Saturday February 11 between the Iranian regime and the Swedish delegation.

This comes at a time when Ahmadreza Jalali, an Iranian-Swedish medicine expert, has been held in prison in Iran from Spring on charges of spying, while his family and human rights organizations have announced that he’s been threatened with execution.

Amnesty International writes in this regard: “Ahmadreza Jalali appeared in the revolutionary court branch 15 on January 31, without a lawyer. He was informed by the judge that he’s been charged with spying and may face death penalty.”