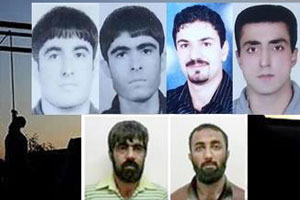 Hamed Ahmadi, 33, Jahangrir and Jamshid Dehghani (two brothers, 28 and 29), Kamal Mowlaie 30, Seddiq Mohammadi, 28, and Hadi Hosseini, 31, were hanged in Gohardasht Prison in the city of Karaj.

The regime’s judiciary had sentenced to death these Kurdish prisoners after being convicted of the vaguely worded offence of “enmity against God.”

Iran under mullahs rule, remains the world highest executioner per capita. Since Hassan Rouhani has taken office as president some 1300 prisoners have been executed.

Amnesty International had issued a statement yesterday, March 3rd to spare the lives of the six Sunni political prisoners on death row.

Hassiba Hadj Sahraoui, Deputy Middle East and North Africa Director at Amnesty International had urgently appealed to the Iranian authorities to halt the execution of these men, and quash their death sentences which followed grossly unfair trials.’

They were among 33 Sunni men currently on death row in Iran. All of the men maintain that they were targeted solely because they practiced or promoted their faith, such as taking part in Sunni religious seminars and distributing Sunni religious reading materials, the statement said.

Previous articleIRAN: Call to save six Sunni political prisoners on death row
Next articleUN ‘deeply troubled’ by high number of executions in Iran