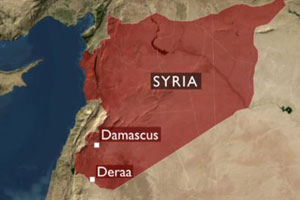 The remains of sixteen Iranian Revolutionary Guards and their Afghan mercenaries who were recently killed while fighting for Bashar Al-Assad in Syria have been buried in Iran.

Ali Reza Tavasooli, one of the most prominent foreign mercenaries of the Iranian regime fighting for Syrian dictator Bashar Al-Assad was killed on Saturday in the southern province of Daraa.

Mohammad Sahebkaram Ardekani, another IRGC captain, has been killed in Syria on March 3 and his remains will be transferred to Iran in the coming days.

Farhad Khosheh, a member of the IRGC who has been in Syria is to be buried in the city of Langerod in Iran on Thursday.

A burial service was held for Mohammad Ali Khavari in the city of Varamin on Wednesday.

The remains of Naeem Rezaei and Hossein Ahmadi who were both from Afghanistan and dispatched by the regime to Syria were buried in the city of Karaj.

Prior to these burials two other Afghans were buried in the city of Esfahan. They were identified as Hossein Jaffari and Mohammad Hosseini.

The Iranian regime does not announce the rank and the number of those killed in Syria.

The reports of burial services held in Iran for IRGC members and their Afghan mercenaries have risen and include high ranking commanders.

Previous articleSyria: Hundreds of Iran IRGC forces are fighting in Daraa
Next articleSaudi Foreign Minister: Iran is taking over Iraq