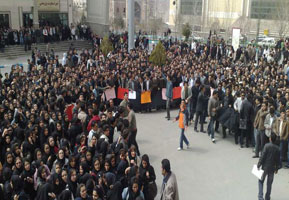 NCRI – Students at Tabriz Azad University have staged protests at the changes to their examination dates – as the Iranian regime tries to clear young people from cities before the June election.

The Iranian regime fears a wave of student-lead riots when the sham ballot is held in June.

In Tabriz, around 1,500 students chanted ‘we need time’ and insisted they could not complete their studies with exam dates brought forward under a directive from the regime’s science minister.

Professors have also voiced their objections to the date-change, saying they have not had time to complete the year’s coursework.

The protests come after the regime also expelled dozens of students from Tehran University in recent weeks in fear at election riots.

The students were also told they would be barred from higher education forever if they revealed they had been dismissed, according to reports from inside the regime.

Rulers have also set up cyberspace bases to monitor and control Facebook and other social networks. Internet bandwidth has also been cut and video calls on G3 mobile phones have been disconnected.

Arrests of young with no criminal record but now branded ‘thugs’ has also increased sharply in recent weeks under pretext of a ‘public security plan’ – similar to that during the 2007 election – which is now in force in towns and cities across Iran.