Iran: Tehran Bazaar Is Not Safe and Acts Like a Time Bomb 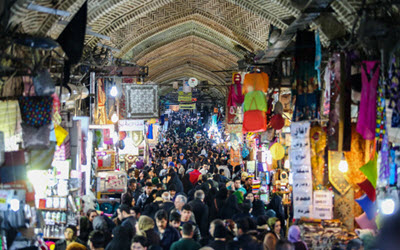 NCRI – Acknowledging the lack of safety in Tehran Bazaar, a member of Tehran City Council said that Tehran Bazaar is like a time bomb that if activated, will lead to a disaster much heavier and more destructive than what happened in Plasco.

Pointing to his visit to Tehran Bazaar, Ahmad Hakimpour said on Tuesday February 14 that “emergency measures need to be taken regarding Bazaar’s wiring system as the wires are hanging from the ceiling of corridors and shops with no external shields while disregarding any safety measures, so that even a spark can lead to a huge fire in this historical arena.”

According to state-run ‘shoraonline.ir’ website, Hakimpour also pointed to the heating issue as one of Bazaar’s major problems, saying “many parts of Bazaar are lacking a natural gas pipeline system, with shopkeepers using electric or oil heaters for heating purposes.”

The member of Tehran City Council regarded this as a huge risk for Bazaar’s fabrics and clothing businesses. “with only a single piece of fabric getting close to such non-standard heaters, a fire the extent of a Bazaar will break out”, he said, “besides, the width of passages in some parts of Bazaar are so narrow that even firefighting motorcycles can’t go through.”

Hakimipour said that the firefighting equipments and facilities in Tehran Bazaar are too little, maintaining that “the possibility of aid operations with such equipments is close to zero.”

It is noteworthy that there are 256 tower blocks in Tehran, of which no information is available in Tehran municipality. If for any reason, something similar to Plasco incident happens for any of them, it will turn into yet another disaster”, says Pirooz Hanachi, Secretary of Iran High Council of Urban Development & Architecture.

According to state-run ISNA news agency, Hanachi said on Wednesday February 8 that “a final report is being compiled which shows there’s no information on the conditions of this number of tower blocks in Tehran.”

“The 256 tower blocks are generally located in northern parts of Tehran on narrow passages, so that it would be too difficult to carry out aid operations with available facilities”, said Hanachi.

“Plasco building was fairly resistant against fire”, he added, “but it collapsed due to its not being equipped with fire suppression system.”

Meanwhile, a member of Tehran City Council named ‘Ahmad Masjed Jamei’ acknowledged that crisis management in the capital is too inefficient and that it itself needs to be managed. He had previously said that when fire started in Plasco building, no crisis management team was in place.

“Following the fire in Plasco building, I visited the place and saw no crisis management team over there”, he said.

Previous articleMaryam Rajavi: The Only Solution for the Acute Crises in Khuzistan Is to Escalate Popular Protests and Rise up to Drive Back the Clerical Regime
Next articleIran: Family Members, Protest to Death Sentence of Their Son