Iran: The Untold from a Mother, About Her Son’s Execution 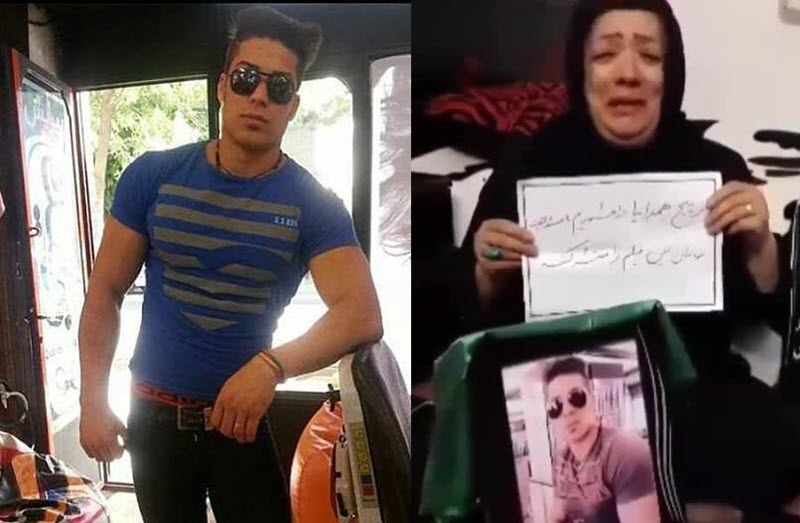 It has been a few weeks since the painful execution of a young athlete in Iran. Bahman’s death sentence was suspended last minute, and the news of his pardon was also released to his family; but the regime’s judiciary went ahead with his execution the next day, with everyone in utter disbelief.

“Bahman Varmezyar is a hair stylist and a personal trainer in Hamedan. On 31st March 2015, he and a few other armed thieves, robbed a jewellery shop. 18 days after, he surrendered himself along with the stolen property, to the authorities; despite being pardoned by the plaintiff, he and one of the other accused thieves were sentenced to death by hanging.”

On Monday 16th April, when Bahman’s family last visited him, they received a phone call in which they were informed that he was pardoned. Bahman was saved from death, and his family were so happy that they were planning a celebration. But shortly after, their world turned upside down as they were notified that the death sentence was only delayed, not cancelled.

It has been weeks since Bahman’s execution, but his mother refuses to believe his death. She still cries and reviews that day over and over: “how is this possible? how can everything change in just half a day? if they were going to execute him, why did they tell us that he was pardoned, instead?”.

She recalls: “on Monday (16th April) we went to the prison to say Goodbye to Bahman. They were going to hang him the next morning. We went to whoever and whatever organisation that we could think of, to ask for help; but it was no use”; until “a man called and told me excitedly that Bahman was pardoned, and the execution cancelled. I could not believe what I was hearing, so I asked him a few times to confirm. All details were correct. I was so happy that I could hardly breathe. I shared the news with my husband too. The prison informed us that Bahman was transferred from solitary confinement to jail. We sacrificed a ship (as part of a religious ritual) to celebrate; our relatives and friends visited us too, to congratulate. We also spoke with Bahman on the phone. He kept on thanking me for my prayers and kept on saying that he owed his life to me”.

Unfortunately, their happiness did not last for too long. Whilst the news of Bahman’s pardon (which, as claimed by some, was approved by high-ranking officials) was being published in the media, Hamedan’s judiciary was denying the news, and attributed the false information to some judicial errors. Bahman’s lawyer was also informed that the execution was going to be carried out the next morning, at Hamedan’s prison.

This was unbelievable. Bahman’s family were shocked, as just hours ago they were celebrating the cancellation of his sentence. His mother even describes how she had obtained the consents of more than 300 residents and tradespeople of the area where Bahman had robbed from. But the judiciary insisted on Bahman’s execution due to the “terror and fear” that he had apparently caused others.

Despite no previous criminal records at all, Bahman was executed at 6:30 am on Tuesday 17th April 2018.

According to the annual report of Amnesty International, Iran has the highest rates of executing its own citizens.