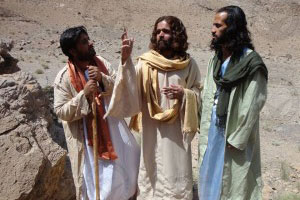 Photo: A scene of movie on Jesus being made by a Christian arrested in Iran

Messrs. Shahram Ghaedi, Heshmat Shafiei and Emad Haqi were arrested on September 27 in the city of Fooladshahr.

MOIS agents raided the home of Mr. Sharam Ghaedi at 6:30 pm. They searched his home and confiscated his personal items before detaining him.

Shahram Ghaedi, an actor, was making a movie about the life of Jesus Christ.

There is no information on the whereabouts of the three arrested Christians in Iran.

Christians have been detained and sentenced to long-term imprisonment and exile, many without access to a lawyer or a fair trial.

Pastors Behnam Irani, Matthias Haghnejad and Deacon Silas Rabbani were charged at the so-called 1st Branch of the Revolutionary Court on Tuesday in city of Karaj.

Pastor Haghnejad, Pastor Irani and Deacon Rabbani, who are being held separately in Ghezal Hesar Prison, were recently charged with ‘Mofsed-e-filarz’, or ‘spreading corruption on earth’, which carries the death sentence.

Mervyn Thomas, Chief Executive of Christian Solidarity Worldwide said: “It is completely unacceptable that they have faced trial once again on unwarranted charges and that their unjust prison terms may be extended even further,” BosNewsLife reported.

Mr. Thomas also condemned the execution of Mr. Amir Aslani adding that his “execution is emblematic of the arbitrary nature of the Iranian judicial system and the flagrant disregard of the nation’s highest judicial authority for the rule of law and justice.”

“Some in the West are calling for renewed relations with Iran in the face of the threat posed in Iraq and Syria by [Islamic State] ISIL [militants]. However, it is worth noting that Mr Amir-Aslani was one of six people executed on the same day that the British Prime Minister met with President Rouhani at the United Nations,” Thomas said.

“It is highly debatable whether a country that severely represses its own religious and ethnic minorities and conducts an average of two executions a day can contribute meaningfully towards resolving a conflict that is itself fuelled by religious sectarianism and an intolerance of indigenous minority communities.”