IRAN: Two men paraded in the streets of Pakdasht 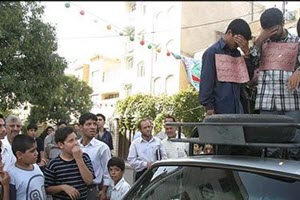 The commander of the regime’s suppressive security forces in Pakdasht said the degrading punishment was ordered by the regime’s judiciary officials.

Authorities frequently parade young men, forced to sit backwards on donkeys, in their local neighborhood so as to embarrass and humiliate them. Previous such barbaric acts of parading youths targeted young men on charges of disregarding nightly curfews or showing disrespect towards security agents.

The human rights situation in Iran has drastically deteriorated since Hassan Rouhani took office as President two years ago.

Previous articleVIDEO: Nuri Maliki must be arrested in Iraq – Struan Stevenson
Next articleMan faces death in Iran for ‘waging war on God’ while a minor