Iran under mullahs is a ‘terrorist state’ with no religious ideology, US statesman declares 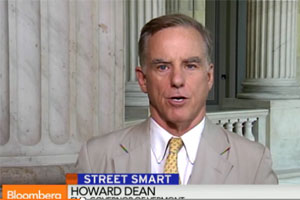 Former US Governor Howard Dean has branded Iran under mullahs rule as a ‘terrorist state’ whose ideology is not religious but entirely political.

Mr Dean said in an interview on Bloomberg TV that US policy on Iran needed an overhaul and that the US had cut off the dissident wing of the Iranian population while then giving billions of dollars to the regime for the privilege of extending the talks for four months.

He said of US policy in the region: “I think we have it backwards.”

Mr Dean also said the US had left the 2,800 residents of Camp Liberty in insecurity Iraq after promising them safety.

And he said Iraqi Prime Minister Nouri al-Maliki – who he branded a ‘puppet of the mullahs’ – was the real threat to Iraq, and not the terrorist group ISIS.

He added: “ISIS is a bad problem caused by Maliki. I think Iraq is finished as a country and the country will be divided up by religious sects with Iran controlling the Shia section and that there is nothing that the US can do about it.”