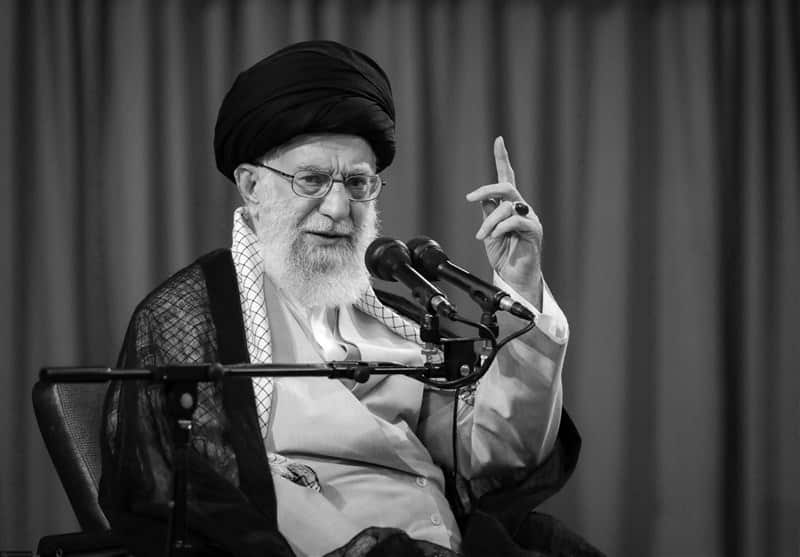 On January 9, 2022, the Iranian regime’s Supreme Leader, Ali Khamenei, delivered a speech after a long period of silence despite the regime’s “sensitive” situation, as described by state media and regime officials.

Khamenei rushed to the scene to boost the morale of his disheartened forces amid the regime’s exacerbating domestic and international crises. In his contradictory remarks, Khamenei twisted the realities and desperately tried to portray the regime’s recent setbacks as “victories.”

After months of silence regarding the regime’s negotiations with world powers over its clandestine nuclear program, Khamenei uttered contradictory words, reflecting his desperation. “Negotiations and interactions with the enemy are totally different from succumbing to their bullying,” he said.

His conflicting remarks about the nuclear talks coincide with world powers’ warnings that time is running out for reviving the nuclear deal. Sanctions, coupled with the regime’s institutionalized corruption and mismanagement, have crippled Iran’s economy, and state media and regime officials warn about an immediate “economic collapse.”

By relying on a totally subservient parliament and a handpicked president, Khamenei sought to finally close ranks and consolidate his fragile regime. Nevertheless, Iran’s current economic and social crises have intensified the regime’s factional feuding, prompting Khamenei to explicitly warn of “division” and political “confrontation” within his regime.

“We should decrease any element that would lead to diversion. The enemy is waiting in the wings, and we should always consider this fact,” Khamenei cautioned. While Khamenei was calling for “unity,” the regime’s factional feuding reached a new height at parliament as Raisi was defending his highly flawed budget plan.

Despite Khamenei’s desperate calls for unity, seventy-six MPs voted against Raisi’s budget bill, with many warning Raisi about the budget’s loopholes and the devastating consequences of some measures, such as removing the official exchange rate, which would cause a currency shock and result in a hike in the inflation and already skyrocketing prices of consumer goods.

“We warn Mr. Raisi that society is not prone to these crises. Do not mess with society. Assess the conditions in the region and the power of the people,” Mehdi Asgari, warned Raisi on Sunday, according to Majlis’ official, Khan-e Melat News Agency.

Khamenei refused to address Iran’s current social and economic crises, merely pointing to some general factors such as “economic issues, inflation, skyrocketing prices, and people’s livelihood.” Khamenei brazenly said, “Some speak of these economic issues as if the Islamic Republic has not had any other achievements.”

“Unfortunately, hunger and poverty have become significant in Iran, and 60% of the country’s population live below the poverty line. By accepting that about 60 million Iranians are eligible to receive subsidies, the parliament is accepting that 72% of the Iranian people are entitled to donations,” said Ahmad Tavakoli, a member of the Iranian regime’s Expediency Council during his speech at the so-called Islamic Associations of Independent Students on January 7. Tavakoli warned that “If the state does not address these problems, incidents will occur that should not.”

Khamenei is aware of the current explosive state of society and terrified of another uprising and the role of the Iranian Resistance. While complaining about “enemies” and their “extensive propaganda on social media,” Khamenei expressed his utter fear of Iran’s vibrant youth and the organized Resistance movement.

“Some try to diminish hope in the younger generation. Do not let them mesmerize the youth with their promises and make them lose faith [in the regime],” he said.

While Khamenei was speaking of Iranian youth, hundreds of them in the south of Tehran chanted “Death to the dictator.” They were attending the funeral of Baktash Abtin, a renowned Iranian poet and political prisoner, who passed away due to the regime’s deliberate and criminal prevention of his medical treatment.

Khamenei had to desperately invoke the memories of his eliminated terror master, Qassem Soleimani, inexplicably describing Soleimani’s termination as a “victory” to somehow justify the regime’s failure to take any inaction following the empty promises of a “harsh revenge.”

In a nutshell, Khamenei’s speech portrayed a clear picture of Iran’s restive society and the regime’s desperation.