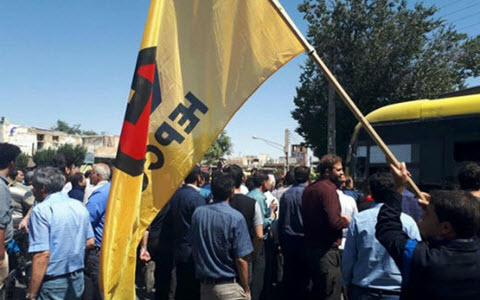 NCRI – The workers of the two Hepco and Azar-Water factories in Arak held separate gatherings on Wednesday, August 30, 2017 in protest against the uncertainty about their unpaid wages in front of the governorate building in Markazi province and the martyrs square in Arak.

According to the state-run ILNA news agency, hundreds of workers participated in each one of the two gatherings.

According to the report, the workers of the Azar-Water Factory in Arak have nearly 5 months of unpaid wages, and the wages of the workers at the Hepko factory have not been fully paid since December 2016.

In recent months, workers’ protests have been held in Arak many times.

In mid-June, four hundred workers of Arak’s Azar-Ab (Azar_Water) Company gathered in front of the provincial governorate and demanded payment of their salaries.

In addition, about 900 workers from the Hepco factory in Arak, on Tuesday, 4 July 2017, protested against the failure of the employer to fulfill their promise to pay their claims and unpaid wages and rallied from the manufacturing unit to the governorate building in Markazi province and the central square of Arak.

Previous articleTo Political Prisoners on Hunger Strike in Gohardasht Prison City of Karaj, Iran
Next articleIran Regime Will Not Give up Its Nuclear Plans and Will Continue With Human Rights Abuses