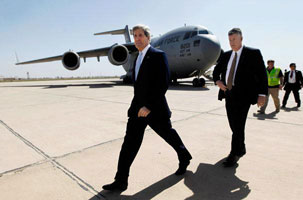 During an unannounced trip to Baghdad, Kerry lobbied Iraqi Prime Minister Nouri al-Maliki for greater scrutiny of flights that cross Iraq. He appeared to make little headway with Maliki, a Shiite with long ties to Iran.

Maliki is a prickly leader whose relations with U.S. officials have grown more strained since the departure of American forces and the re-emergence of widespread sectarian violence in Iraq. Maliki’s consolidation of power worries his American backers. His dealings with Shiite Iran worry them more.

The Obama administration has been unable to persuade Iraq to block overflights from Iran or even to perform regular inspections.

“We had a very spirited discussion,” Kerry said after the meeting with Maliki, “and I made it very clear to the prime minister that the overflights from Iran are in fact helping to sustain President Assad and his regime.”